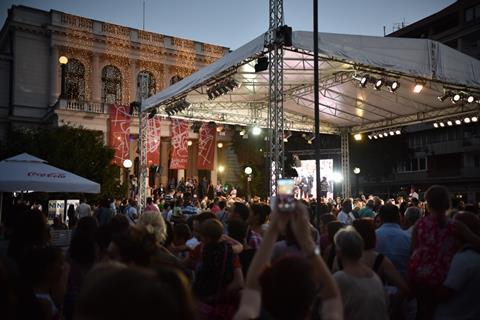 One of the most well-attended events of Sarajevo’s Industry Days is the True Stories Market. The third editio was held in the festival’s industry hub, the Hotel Europe, on August 13.

As part of Sarajevo’s Dealing with the Past programme, the market presented five stories. An open call will now be issued in September for filmmakers to apply to produce a project inspired by one of the stories. The project will receive a €3,000 research grant from Belgrade-based Heartefact Fund.

One story came from the Foundation for Building the Culture of Memory in Prijedor, a city in Republika Srpska. According to the Foundation’s Edin Ramulić, the city holds several infamous records, including the highest number of sentenced war criminals and mass graves from the Bosnian War.

This story was about Nermin Karagić, a Bosniak and a minor at the time who survived two executions by shooting, and a third one, when he was separated from the convoy that was supposed to take him to the Bosniak-controlled territory during the war. He also witnessed the murder of his father and over 100 other civilians, to which he testified in the Hague. He is also the person who testified the most hours at the Tribunal. His story is virtually unknown in the media.

A second story from Prijedor explored the ability to create a new narrative and the politics of memory. It was presented by Goran Zorić of the Youth Centre KVART. This activist organisation tried to build a monument to all 108 children from the city killed in the war, regardless of their nationality, but the project was sabotaged by both Serbian and Bosniak politicians.

“A film based on this story should be able to shift the conflict away from the imposed ethno-national lines towards one between disempowered citizens and corrupt politicians,” said Zorić.

A third story also dealt with an attempt at reconciliation. It was about peacebuilding in communities in Eastern Bosnia. The story was presented by Augustina Rahmanovic of Vive Žene, an NGO which supports women and children as the most vulnerable war victims.

From September 2012 through September 2014, an inter-ethnic group of Serbian and Bosniak women, living in Kravica and Konjević Polje respectively, worked intensively under the guidance of a psychotherapist with the NGO. The group members shared their wartime experiences and trauma, as well as the difficulties they face in their families and communities in the present: in their respective towns, they are ostracised by the members of their own ethnicity for their activities directed at reconciliation.

From the expert NGO Medica Zenica, represented by Sabiha Husić, the attendees heard a fourth story. It was about an unidentified Bosniak woman who was raped as a teenager by three Serbian soldiers.  Unlike most other women, she decided to reveal what happened and soon everybody knew. “Theynever stopped pointing their fingers at me,” the woman is reported as saying.

The last story concerned Srebrenica and came from the Balkan Investigative Reporting Network, represented in the True Stories Market by Mirna Buljagić. It takes its title I Was Hardly A Newborn from the book by Amir Šesić, a young man whose father was killed in the massacre. His mother pregnant with him, managed to reach the city of Tuzla. She gave birth in the hospital there, and left Amir behind. Growing up in an orphanage, Amir’s life was entangled in the research into mass shootings and finding the remains of the killed.

“This year the involvement of the NGOs who have obviously taken a more serious interest in our programme Dealing with the Past is much higher,” said Robert Tomic Zuber, host of the programme and a member of the selection team. “It took some time for this initative to take root.”

“We reduced the number of stories from nine to five, because we felt we should give more space to the NGOs to tell their stories,” he explained. We worked with the representatives of the NGOs for four days prior to the event, helping them tell their stories in a more focused way and to introducing them more intimately to how the film industry works.”