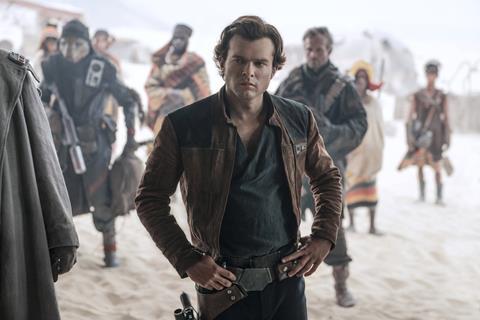 Disney and Lucasfilm executives expect Solo: A Star Wars Story to deliver a potentially record-breaking Memorial Day weekend debut in North America in the $130m-$150m range. The film opens across most of the world later this week and appears likely to deliver a worldwide debut of more than $300m.

No release has ever grossed more than $140m over the Memorial Day weekend session in North America, regarded as the curtain raiser on the summer box office season. The current record-holder is Pirates Of The Caribbean: At World’s End on $139.8m in 2007 (although Pirates Of The Caribbean: Dead Men Tell No Tales opened in the same slot last year and scored the second lowest debut in the series on $78.5m.)

Solo: A Star Wars Story, which received its world premiere in Hollywood on May 11 prior to the international premiere in Cannes on May 15, will open in North America on Friday (May 25) in more than 4,380 theatres, comprising 3,300 3D locations, more than 400 IMAX screens, more than 600 Premium Large Format screens, and more than 200 D-Box venues. Previews begin on Thursday night.

Typically, Disney executives are down-playing the film’s history-making prospects. Star Wars franchise films tend to open in mid-December when competition is subdued, while Solo will enter a crowded market with Deadpool 2 entering its second weekend, and Avengers: Infinity War still in play.

Still, nobody expects Solo to struggle. Executives have not provided any guidance on the international box office. Solo: A Star Wars Story will open day-and-date with the US in approximately 88% of the marketplace this week. Star Wars: The Last Jedi opened on $231m in its first wave last December, which encompassed most of the world excluding China, and combined with the North American bow a $300m-plus worldwide launch would appear to be on the cards.

China is the expected highlight on Friday, which also sees debuts in Mexico, Spain, India, Poland, South Africa, Turkey, Vietnam. Japan is the only major territory not opening this weekend and receives the tentpole on June 29.