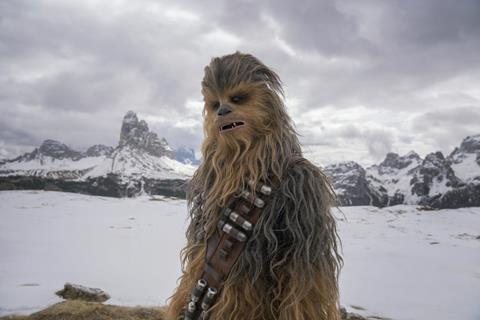 Despite failing to make up much ground on its slow start, Solo: A Star Wars Story held onto the top spot at the UK box office this weekend, dropping 35% with £3.2m.

Avengers: Infinity War held onto third this weekend, dropping a slender 13% with £1.1m for £68.8m to date. It is now the 10th highest-grossing film in UK history, surpassing Mamma Mia!.

US comedy Book Club – about four lifelong friends whose lives are changed after they read Fifty Shades Of Grey in their monthly book club – debuted to a fairly underwhelming £705,000 from its 519 sites, an average of £1,358. The film opened to $13.6m in the US, comparatively a much better result.

Boosted by takings over the UK school holidays last week, Peter Rabbit is now up to £40.6m in its UK run. The film placed 11th in the chart this weekend with £98,400 from 342 sites.

Arnaud Desplechin’s French drama Ismael’s Ghosts, starring Marion Cotillard, opened with £4,548 from 17 sites this weekend, with previews taking it to £9,048 so far.

UK cinemas will be looking to Jurassic World: Fallen Kingdom to re-energise the country’s box office when it gets released on Wednesday, June 6. In the arthouse space, Lionsgate is releasing McQueen, a feature documentary about iconic designer Alexander McQueen on Friday, June 8.