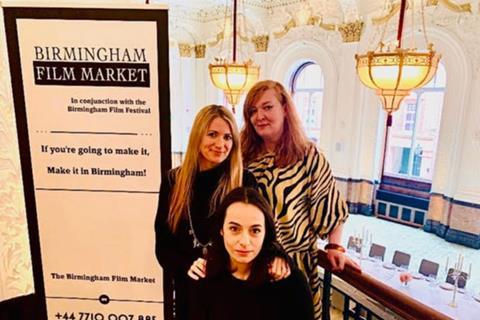 The UK’s inaugural Birmingham Film Market (BFM) is set to take place on November 26, with the likes of Sony Pictures’ senior vice president of scripted production Michaela Fereday, as well as representatives from Curzon, Bad Wolf and Bankside Films in attendance as part of a pitching opportunity for aspiring filmmakers and TV series creators from across the West Midlands.

In a speed-pitching event, 55 filmmakers will have 10 minutes to present their ideas to five executives.

The market is being held at Birmingham’s Grand Hotel, and is taking place in conjunction with Birmingham Film Festival (November 19-28). Louise Osbourne of Emmeline Productions set up the BFM alongside fellow filmmakers Sophie Ivanova and Mellissa Donello. The event is largely self-funded by Birmingham Film Market. A number of sponsors have made contributions including Create Central, BOA Media and Start Electric.

“It is hard for emerging regional talent to get their projects developed, financed and produced,” said Osbourne. “The BFM was created by three female filmmakers to encourage gatekeepers to see the opportunities first-hand.

“We feel strongly that people from the region should not have to go to London or other cities to progress, but we recognise that we needed to invite people in the industry to see the talent and possibilities of setting productions here.

“We want to build connections and create opportunities, injecting fresh and inclusive voices into the industry, while stimulating growth and investment.”

The BFM is being endorsed by filmmaker Steven Knight, the Birmingham-raised Peaky Blinders creator, who most recently wrote Pablo Larrain’s Spencer, and actress Jaime Winstone, who will attend in-person.

Also in attendance will be Johann Grech, who leads the Malta Film Commission and is the CEO of the Malta Film Studios, to discuss the advantage of filming in Malta.