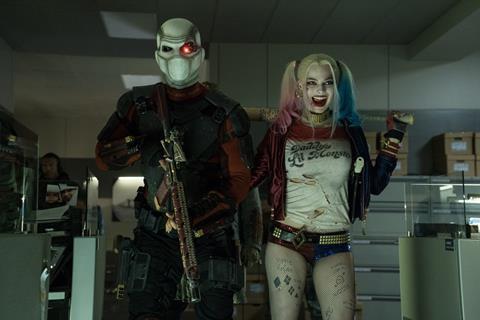 Battling both the sun and a critical bashing, Suicide Squad shot to the top of the UK box office on debut.

More than 40% of Suicide Squad’s opening weekend came from Friday (including midnight screenings), which could suggest a fast-burn run. Its midweek performance and hold this coming weekend will give a clearer indication.

Hit hard by the good weather, Finding Dory fell 51% in its second weekend as it dropped to second with $5.2m (£4m).

Universal’s action sequel is up to $18.4m (£14.05m) after 12 days in play and is now the second-highest grossing Bourne outing in the UK.

It’s currently tracking ahead of series leader The Bourne Ultimatum, which stood at $16.9m (£12.93m) at the same stage.

Paramount’s latest mission for the USS Enterprise crew now stands at $16.9m (£12.94m), and will end its run as the lowest-grossing outing to date of the rebooted series.

Released in 27 sites through Soda Pictures, Up For Love posted a non-final UK debut of $18,000 (£13,751). Its leading site was the Everyman Belsize Park, followed by the GFT and Curzon Bloomsbury.

Soda Pictures’ Ingrid Bergman: In Her Own Words and Picturehouse Entertainment’s Weiner-Dog are among the films receiving a limited release.