Report finds that comedy is most successful genre. 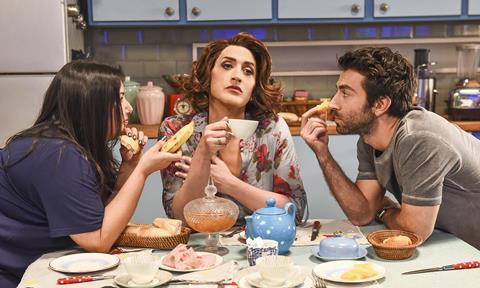 Comedy is the most successful genre in Brazilian film, according to a report released by Filme B.

The local theatrical tracking firm released data about the growth of Brazilian cinema since the so-called Retomada, the renaissance of local cinema from the mid-1990s onwards.

According to the report, 14 of the top 20 films of the last 20 years have been comedies (see full list below), including If I Were You 2, Head Over Heels 2 and My Mom Is A Character.

The most popular comedies often feature stars of soap operas and shows from the country’s dominant broadcaster, TV Globo or Globosat - their cable TV service – in lead roles.

This trend has continued this year, with local hit, Minha Mãe É Uma Peça 2 (My Mom Is a Character 2, pictured) starring TV and theatre comedian Paulo Gustavo overtaking The Ten Commandments - The Movie as the highest-grossing Brazilian film of the Retomada with R$124.5m ($38.9m).

“Besides the comedies based on TV and Pay TV stars, this year the most seen local films are also about YouTubers sensations, such as Eu Fico Loko and Internet - O Filme,” says Paulo Sergio Almeida, director of Filme B.

The data, released to mark Filme B’s 20th anniversary, also showed that the number of domestic films released increased from 22 in 1997 to 144 films in 2016.

In the last two decades, three Brazilian films topped the annual ranking, surpassing, or tying with Hollywood productions: Two Sons of Francisco in 2005, Elite Squad 2 in 2010 and The Ten Commandments - The Movie in 2016 (tied with Captain America: Civil War).

The local industry has been helped by tax incentives and the country’s screen quota system, which requires movie theatres to include Brazilian films in their programming. This year the policy will guarantee an average of 53 days of local titles per screen.