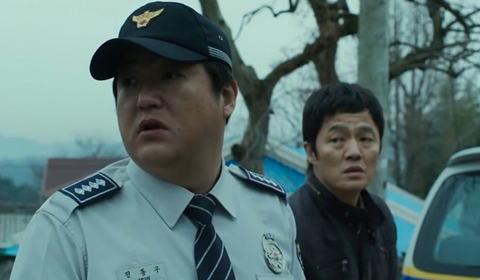 In the midst of location scouting, Na recorded and sent a heartfelt and unintentionally humorous video that depicted him and his cameraperson dodging cars on the side of a road.

“The Wailing is a film that many people worked on for five, six years. I had so many doubts along the way, but kept to what I thought would be right, which is why I’m so happy to receive this great award from you. Thank you very much for telling me to keep going down the road I want to go. I will do so without wavering now,” he said about the top prize.

The Korean horror thriller, which became a hit upon its May release locally, made its international premiere in Cannes. The director also had his debut feature The Chaser screen in the “20 Years, 20 Favorites” retrospective of features BIFAN audiences most wanted to see again from past editions.

They described The Wailing as “a masterful, complex film that builds to a shattering climax and which favorably echoes such genre-transcending classics as The Exorcist and Seven. Like Friedkin and Fincher, director Na Hong Jin has crafted a hugely entertaining cinematic experience that resonates with enough subtleties and layers to inspire repeat viewings.”

Lee Sangho, whose Truth Shall Not Sink With Sewol sparked the still on-going controversy at the Busan film fest, picked up Special Mention with documentary Who Killed Kim Kwang-seok?

BIFAN on the rise

Setting a record for itself, BIFAN screened 320 films (85 more than last year) from 49 countries including 52 world premieres.

Festival director Choi Yongbae said the 20th edition “also had more audiences” this year. Final figures are yet to be announced.

The fest closed with Yeon Sang-ho’s zombie animation Seoul Station, the prequel to his current box office hit Train To Busan, the live action zombie thriller that premiered in Cannes.

Yeon asked the audience not to try to find too many similarities but to simply think of Seoul Station as what happens one day before Train To Busan. Distributor NEW is set to release Seoul Station locally on Aug 18.

Originally planned to host 2,500 people on the Grass Square of City Hall with an outdoor screening of the closing film, the fest’s awards ceremony was moved indoors to the 500-seat Eoul Madang inside the building due to rain forecasts.

Attendees included Yeon with actress Shim Eunkyung from his closing film; Anne Parillaud, the star of Nikita, which screened in the Gaumont retrospective; Xin Zhilei, star of competition film Crosscurrent from China; and filmmakers such as Park Chan-wook and Jaime Shim.

The project also won the Aurora Media Holdings Award, which comes with $5,000.

The NAFF Award with a cash prize of $8,900 went to Zeng Zeng’s Chinese revenge thriller Dust To Dust.

BIFAN kicked off July 21 with a balmy, star-studded outdoor opening ceremony at City Hall, which featured the presentation of Achievement Awards to people who contributed to the growth of the fest, including former programmer and festival director Hong-Joon Kim, whose politically-tinged firing after the eighth edition prompted an industry boycott.

With BIFAN Rush, the fest has two more days of screenings including a couple of surprise films.