‘Thor: Love And Thunder’ blasts off with $302m debut at global box office; ‘Minions: The Rise Of Gru’ hits $400m with second session 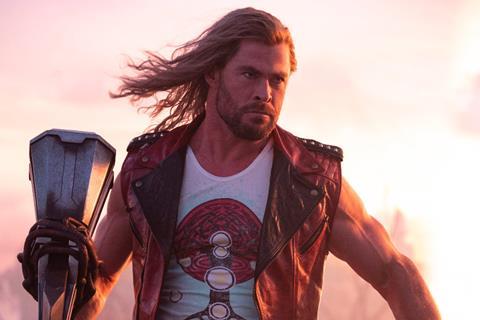 UPDATE: Disney’s release of Thor: Love And Thunder has continued the upwards trajectory of Marvel’s hammer-wielding franchise, which has seen steady box office increases with each successive Thor film.

The latest in the series – which is the fourth, and the second directed by Taika Waititi – has debuted with a confirmed $303.4m worldwide, comprising $144.2m in North America and $159.2m from 47 international territories.

Thor: Love And Thunder, which has yet to open in China, Russia or France, topped the box office chart in all its Asian and Latin American markets, and in all its European territories except Germany and Finland.

Love And Thunder performed particularly strongly in Australia and New Zealand – delivering the second-highest opening of the pandemic era, and the highest in 2022 to date.

Previously for this franchise, Thor grossed $449m in 2011, followed by Thor: The Dark World with $645m in 2013, and Thor: Ragnarok with $854m, 2017. On the latter title, China accounted for $112m, and Russia/CIS $24m. Disney has yet to land a China release date for Love And Thunder, but would nevertheless push the film past Ragnarok’s total if it can triple the new film’s opening number over the full run of its release.

UPDATE: Facing competition from the arrival of Disney’s Thor film, albeit not directly competitive for the family audience, Universal’s Minions: The Rise Of Gru fell 57% in North America (with confirmed takings of $46.1m) and 35% in international holdover markets (with $60.8m), combining for a $106.9m weekend session. Total after two weekends (or three weekends in the case of sole early market Australia) is $405.8m.

For international, the Illumination Entertainment title was boosted by arrival in France, delivering $6.8m including previews, plus $1.4m in Belgium.

In holdover territories, Mexico ($5.7m) was just ahead of UK/Ireland ($5.2m), although the countries are tied for cumulative totals on $22.1m.

Also for Universal, Jurassic World Dominion added a confirmed $23.9m worldwide, pushing the total to $876.5m. That number places Dominion in 74th place in the all-time global box office chart. In this chart, the top 50 titles are all above $1bn.

Universal/Blumhouse’s The Black Phone added $12.5m, pushing the global total to $99m. Mexico remains far and away the strongest international territory, with $11.4m. Future key markets include Australia and Brazil (both July 21), and South Korea (September 14).

The Black Phone is one of eight titles (including two Asian films) grossing at least $10m worldwide at the weekend. The global chart is currently demonstrating notable strength in depth, more typical of pre-pandemic patterns than has recently been the case.

UPDATE: Paramount and Skydance’s Top Gun: Maverick added a confirmed $40.2m at the weekend, bringing the global total to $1.185bn comprising $587.9m internationally and $597.4m from North America. That places the Tom Cruise belated sequel in 22nd place in the all-time global box office ranking, just ahead of Minions ($1.16bn), and below Iron Man 3 ($1.21bn).

Top Gun: Maverick fell 40% in international holdover markets – steeper than was previously the case for this gravity-resistant title, and in the face of competition from the Thor film. The North America drop was likewise 40%.

South Korea, where the film is only in its second week of play, added $7.4m, taking the total there to $38.4m.

The presence of these two titles together in the market helped drive China weekend box office to a $61.3m total (according to Artisan Gateway) – the highest weekend tally since late February, when the market was still dominated by Chinese New Year holiday titles, and before the current (albeit now declining) Covid surge.