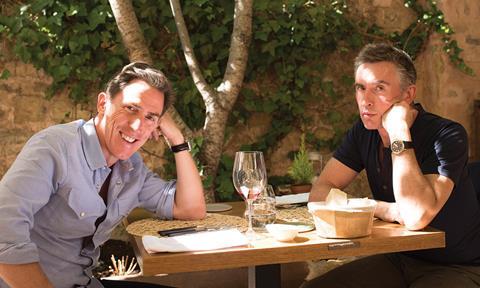 World premieres of Michael Winterbottom’s The Trip To Spain (pictured), Nick Broomfield and Rudi Dolezal’s Whitney. “can I be me,”, and Hell On Earth: The Fall Of Syria And The Rise Of ISIS by Sebastian Junger and Nick Quested are among the line-up at the 16th annual Tribeca Film Festival (April 19-30).

Festival top brass led by new director of programming Cara Cusumano and artistic director Frédéric Boyer unveiled on Thursday 82 of the 98 features that will screen at this year’s edition.

Trimmed down by 20%, the festival received a record number 8,700 submissions, of which 3,362 were features – and includes 32 films in competition comprising 12 documentaries, 10 US narratives and 10 international narratives. Films in competition will compete for cash prizes totalling $160,000.

To honour Earth Day on April 22, a selection of documentaries highlighting environmental issues will play on the day.

All selections are world premieres unless stated otherwise. IP = international premiere; NAP = North American premiere. As previously announced, Tribeca will open with the music industry documentary Clive Davis: The Soundtrack Of Our Lives.

Spotlight Documentary includes world premieres of Whitney. “can I be me,” by Nick Broomfield and Rudi Dolezal, Hell On Earth: The Fall Of Syria And The Rise Of ISIS by Sebastian Junger and Nick Quested, Alex Gibney’s No Stone Unturned.

Among the Viewpoints selection are the world premiered of Brendan Muldowney’s action-adventure Pilgrimage and My Friend Dahmer by Marc Meyers, as well as Matthew Heineman’s recent Sundance premiere City Of Ghosts.

“It’s uncertain and tumultuous times like these that we need artists and storytellers the most, and this year’s programme is a testament to the unending capacity of film for impact, empathy, and even much needed escapism,” Cusumano said. “Each in their own way, these 98 films fill me with optimism and inspiration at the unique power of our medium, and the eyes of a talented filmmaker to inspire, challenge, and maybe even change the world.”

“This year’s film slate is perhaps our most varied yet in both the generosity in the stories told and the diversity of the styles of filmmaking, with the international films transcending geographical boundaries,” Boyer said. “It is a group of beautiful films of discovery, and strong performances from directors and actors from every corner of the globe, including from countries that are not the mainstay of cinema. We are really impressed with the films, and are excited to share with the Tribeca audience.”