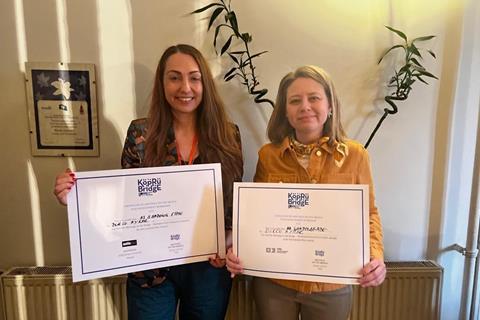 Source: Courtesy of Meetings On The Bridge

Turkish director Burcu Aykar and producer Müge Özen are attending this year’s edition of the TransiIvania Pitch Stop (TPS) with a headwind behind Aykar’s debut feature project As Shadows Fade.

The project is based on a novel of the same name by the late Turkish author Cahide Birgü, about the everyday life of a woman and her struggles with loneliness.

As Shadows Fade was first presented at the Les Arcs Coproduction Village in December 2021 and went on to win the TPS award at the Meetings on the Bridge film development workshop in Istanbul in April. The project was most recently selection for the Sofia Meetings in Bulgaria in early June.

“The book has very cinematic moments and fitted perfectly with my vision of storytelling and the kind of film I wanted to make as a debut,” says Aykar,who won the best short film prize for My Sister at the 2019 Antalya Golden Orange Festival.  “It is very atmospheric in the way it focuses on the internal life of the main character Esin and her daily life.”

Aykar started adapting the work in March 2020, just as the pandemic lockdown was introduced in Turkey. She spent the following months working on the screenplay before she approached two long-standing friends, producers Müge Özen of Solis Film and Nadir Öperli of Liman Film, to take on the job of raising the finance for the film.  Öperli had recently read the book while Özen was amazed she hadn’t been aware of the book’s existence beforehand. “Nadir and I decided to join forces to produce this film since neither of us are strangers at working on co-productions or raising private money for difficult projects from Turkey,” Özen explains.

“This is a bold project that we want to do and we are going to be subtle in showing the relationship between two women. Graceful or delicate would be good words to describe the approach we are aiming for,” Özen suggests.

And as Aykar points out, “in her novel, Birgül doesn’t underline that this is a love story between two women. What is important is that it is an inspiring and turbulent encounter.”

Öperli’s Liman Film joined with the Hamburg-based company Jyoti Film to apply for support from the German-Turkish Co-Production Development Fund, and were awarded €10,000 in project development support. The two companies had previously co-produced Ahmet Necdet Çupur’s documentary Les Enfants Terribles which had its world premiere in Nyon last year.

Özen also has experience of working with Germany when her company Solis Film brought on Dorothe Beinemeier’s Hamburg-based Red Balloon Film to serve as a production partner on Nisan Dag’s When I’m Done Dying which had its world premiere in Tallinn in November 2020.

In turn, Özen will be the Turkish co-producer for Beinemeier on German director Carsten Fiebeler’s Selam Berlin, a coming- of- age story set in German capital after the fall of the Berlin Wall.