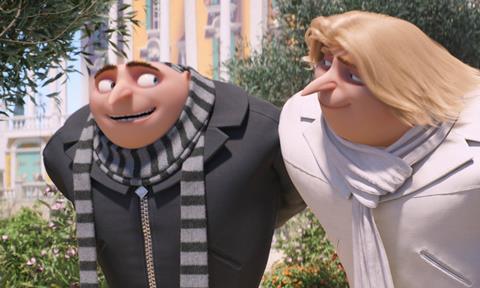 Not even good weather could stop the Minions as Despicable Me 3 scored a huge debut as it landed top of the UK box office.

Universal’s latest Illumination Entertainment offering took an excellent non-final $14.5m (£11.14m) from its 612 sites, marking the fourth-biggest opening of 2017 to date and the third-biggest Fri-Sun debut.

The threequel will hope to challenge those tallies, especially with Cars 3 its only main family competition over the coming weeks.

Baby Driver may have had to settle for second, but sped to a promising UK debut all the same.

With critical acclaim and positive word-of-mouth, Baby Driver looks set for a sustained run over the coming weeks.

All Eyez On Me enjoyed an decent start to its UK run as it charted fourth.

Wonder Woman has crossed the £20m mark at the UK box office in its fifth week of release.

This week sees a saturation release for Sony’s Spider-Man: Homecoming (opens July 5), while Universal’s It Comes At Night receives a wide release.

Studiocanal’s Song To Song, Thunderbird Releasing’s Tommy’s Honour and Curzon Artificial Eye’s The Midwife are among the films receiving a limited release.