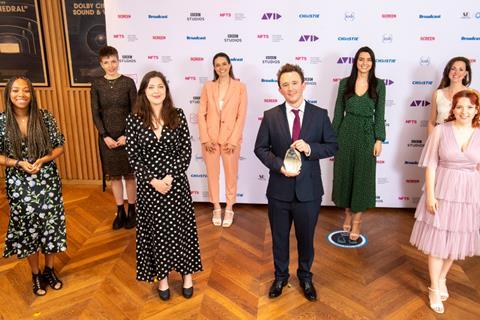 The UK’S National Film and Television School (NFTS) has awarded prizes to its students at the 2021 Graduation Showcase, held in-person at the BFI Southbank and Odeon Leicester Square in London.

The showcase took place over four days of socially-distanced screenings and networking at the Southbank venue, following the graduation ceremony on Monday May 24 at the Odeon, where Sam Mendes was awarded an NFTS honorary fellowship.

Cinematography MA student Charlie Jenkins won two key awards – the £1,000 prize for Most Promising Student; and the best cinematographer award for his work on fiction film Muse, for which he received a seven-day lighting hire package.

“Charlie is an exemplary student whose helpfulness to others knows no bounds,” said a statement from NFTS Cinematography co-heads Stuart Harris and Oliver Stapleton. “As soon as the School re-opened after lockdown, he immediately went to work and assisted the Animation, Model Making and Cinematography departments in the complicated wiring and computer dimming systems needed to produce the Animation films.”

The award for health and safety management in film production was split between the teams from two productions: documentary Tease and TV entertainment format Britain’s Lost Walks.

All the work from the NFTS graduate showcase is available to view on the NFTS website by request.