DECEMBER 26 UPDATE: The judge who ordered El Inca to be pulled from theatres has postponed further court hearings on the matter until he and everybody involved in the case have watched the film. 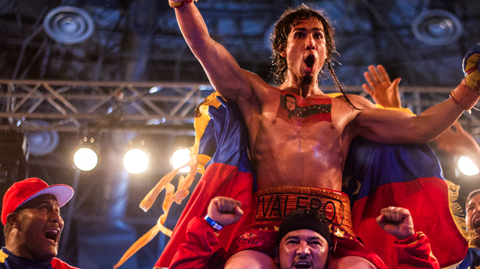 According to the producers of the Venezuelan boxing biopic, Monday’s (26) ruling effectively means Venezuelan judge Salvador Mata García suspended the theatrical run without having seen the film, adding fuel to her claims that the move flies in the face of constitutional safeguards against censorship.

Furthermore producer Nathalie Sar-Shalom of Pa’ Los Panas Producciones told Screen García relied upon submissions by the family of boxing legend Edwin ‘El Inca’ Valero, who it appears may not have seen the film either, despite claiming it violates their honour and right to privacy.

Lawyers on behalf of Pa’ Los Panas on Monday asked the judge to overturn his earlier ruling and acknowledge that the Venezuelan constitution protects free speech. García is expected to respond in the coming days.

DECEMBER 23 REPORT: Figures from the local industry have got behind a boxing biopic that the producer claims is the first Venezuelan film to be pulled from screens in 25 years.

Last week Venezuelan judge Salvador Mata García ordered El Inca be suspended from cinemas after nearly three weeks of release following a complaint by family members of the late Edwin ‘El Inca’ Valero that the film violated their honour and right to privacy.

The preliminary ruling confiscated the master DCP and all copies of the film. El Inca producer Nathalie Sar-Shalom of Pa’ Los Panas Producciones, who will appear in court on Monday (26) to contest the ruling, told Screen the decision “put in jeopardy the core of what the industry is about”.

El Inca recounts the life story of Valero, the gifted Venezuelan former WBC super featherweight and lightweight world champion who won every fight of his professional career by knockout.

Yet Valero’s life was blighted by person demons. He wrestled with substance abuse, had an explosive temper and committed suicide in prison in 2010 after he was arrested in connection with his wife’s murder.

Sar-Shalom said while the film directed by Ignacio Castillo Cottin is an interpretation of Valero’s life, it is rooted in fact based on thorough research. She added that the filmmakers met with various members of Valero’s family and offered to show them the screenplay, only for talks to break down when the family insisted Valero’s brother Luis play the lead. In the end the producers cast Alexander Leterni in the role.

Certain members of the family say they have not meet the filmmakers. Speaking briefly to Screen, Valero’s brother Edward disputed elements of the film and said the family did not grant authorisation to tell the story.

Sar-Shalom said the Venezuelan constitution does not require storytellers to obtain authorisation and narrative interpretations are protected under free speech laws.

Directors and writers group ANAC, producers bodies CAVEPROL and AVEPCA, cinematographers group SVC and critics group C4 are among those that have come out in support of the filmmakers.

An official statement issued by Sar-Shalom on behalf of the filmmakers said, “The judiciary measure is extreme and prevents the Venezuelan public from having access to the film to form their own opinion and thus to be able to debate about it.

“The film is an artistic depiction based on a public figure; his life and death were fully followed and reported by local and international media. El Inca is an interpretation of this story in which the author exercises his right of freedom of speech. The film is not focused on children; moreover, through this tragic love story, it highlights one of the problems that afflict Venezuelan society: domestic violence.

“The Venezuelan constitution and international human rights treaties prohibit prior restraint and even protect content that may be deemed uncomfortable. Free speech does not admit censorship of artistic works like El Inca.

“The production team will continue to work to ensure that all Venezuelans can decide for themselves what they want to see and to bring back El Inca to the cinemas nationwide.”