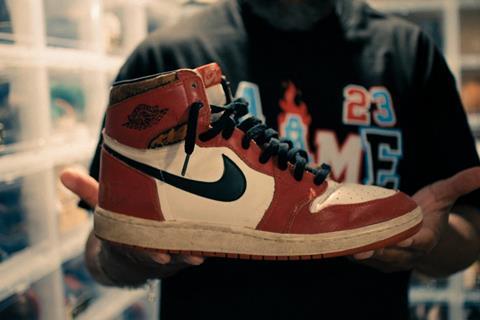 One Man And His Shoes

Vice TV and Shout! Studios have acquired North American rights from London-based Canoe Film to the SXSW Air Jordan documentary One Man And His Shoes.

The film chronicles the story behind Nike’s bestselling Air Jordan sneakers inspired by basketball legend Michael Jordan, and explores their social, cultural, and racial significance, as well as the dark side of success.

Will Thorne of Break Em Films produced and Yemi Bamiro directed One Man And His Shoes, which following the cancellation of SXSW earlier this year will receive its world premiere on May 25 when it airs on Vice TV, which secured TV rights.

Shout! Studios will launch the film across digital and physical formats in the US and Canada after the TV premiere, on dates to be announced.

Bamiro has directed documentaries for Channel 4, BBC, Sky and Vice TV. One Man And His Shoes marks his first feature-length documentary.

Canoe Film managing director Caroline Stern said, “I am so happy to be a part of bringing this film to the global audience, starting with North America, where I think we have found an excellent release strategy thanks to the dynamic thinking of both Vice and Shout!”

Bamiro said, “This is a story that feels apt today more so than any other time. Hopefully, it’ll resonate with audiences who find it, stumble upon it or who have just been patiently waiting for it, but I’m elated that people are going to finally see this film, which we’ve spent so many years working on.”

“One Man And His Shoes is a fascinating deep dive into the ways a commercial success, fuelled by celebrity worship, can go awry,” said Shout! Studios vice-president of acquisitions Jordan Fields. “Given the renewed celebration of basketball’s biggest legend and corporate America’s soaring love affair with greed, this film could not be more timely.”