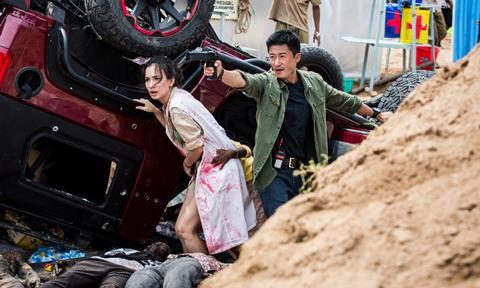 The film grossed an estimated $83.6m over the weekend, extending its reign as the top international release into its third week.

Jing Wu’s film now stands at $687.5m worldwide and last week became the highest grossing film of all time in China. The film broke the $504m record previously set by Stephen Chow’s The Mermaid in 2016.

Wolf Warriors 2 centres on a special forces operative who is pulled back into service when mercenaries terrorise nearby villagers. Jing Wu, Frank Grillo and Celina Jade star in the action tentpole.

The H Collective holds North American and South American rights on the sequel to the 2015 film that grossed $80m in China.

UPDATED: Annabelle: Creation conjured up an outstanding $35.4m from 6,935 screens in 39 international markets. The running international total is now $37.1m.

Asia is the dominate region with an estimated $18.7m, ranking number one in seven of the eight opening markets and representing 53% of international box office.

South Korea generated $6.7m from 947 screens and ranks as the top foreign film in the market behind two local films. The results there surpasses the lifetime total of Annabelle.

Indonesia produced $3.9m on 738 screens, ranking a dominant number one and coming in ahead of all the films in the Conjuring universe.

France generated $2.8m from 262 screens, maintaining the highest per screen average by far of all films in release. These results are 37% ahead of The Conjuring and just shy of Annabelle.

Meanwhile, David F Sandberg’s film grossed $2.6m in the UK and ranks number two. The horror debuted in Russia on $2.3m to rank number two in the market.

Malaysia generated $2.2m in week one, beating out all films in the Conjuring universe to post the biggest opening for a horror film ever. Australia produced $1.8m from 231 screens and ranked a clear number one. The opening weekend results are 28% ahead of The Conjuring and 21% ahead of Annabelle.

Scandinavian markets generated $2.1m, ranking number one in each market. Additionally, Annabelle: Creation was the biggest opening ever for a horror film in Sweden.

The film opens in most Latin American markets this week, including Brazil and Mexico.

Captain Underpants: The First Epic Movie added $1.9m from 10 markets for $21.3m internationally. Mexico and Peru started their market runs on $931,000 and $242,000, respectively. The animation debuts in six markets this week, including Argentina and Colombia.

Despicable Me 3 is now the sixth-highest-grossing animated film of all time at the international box office. In Japan, Despicable Me 3 held second place in its fourth weekend, grossing $3.7m for $38.7m.

Atomic Blonde added $5.1m in 36 territories from Universal and Sierra/Affinity this weekend, for an international total of $18.8m. The worldwide total is $61.5m.

Universal territories generated $3.9m over the weekend for a total of $6.4m, while Sierra/Affinity territories produced $1.2m for $12.4m.

Colombia produced $202,000, while Australia held at number five in its second weekend, producing $711,000 for a total of $2.9m. Universal has 13 more territories to open over the next month. This weekend, the film open in France, Italy, Belgium and Switzerland.

The Beguiled added $272,000 over the weekend for $5.3m. The film stands at $15.9m worldwide. Brazil generated $172,000 in its first week, which is the biggest opening weekend for a Sofia Coppola film there. The film opens in Spain and Egypt this week.

The Emoji Movie grossed $14.1m this weekend from 42 markets, bringing the international sum to $33.6m. With summer holidays in full swing, the film continues to perform well across Europe, which was down just 23% as a region.

Spain generated $1.4m from 516 screens for first place in week one, beating The Peanuts Movie by 21%. The Netherlands generated $1m, including previews, which is four times bigger than the opening of The Peanuts Movie.  Russia is the next market to release on August 17.

Expanding its rollout into Europe this weekend, The Dark Tower grossed $7.9m from more than 5,400 screens in 35 total markets. The Stephen King adaptation stands at $19.3m Internationally. Germany led the pack on $1.5m, France delivered $1.2m, including previews, while Italy generated $885,000 from 347 screens. The film opens in The UK, Australia and Spain this week.

In Vietnam, opening weekend has already exceeded the entire run of Cars and Up. Mexico is the top market on $15.6m followed by Japan on $13.4m. China is the next market to release on August 25.

Pirates Of The Caribbean 5 added $1.8m for a running international total of $614.6m. The tentpole posted strong holds in Germany and Switzerland, where it dropped 4% and 10%, respectively. The Netherlands saw an 11% drop from last weekend, while Belgium box office dipped 21%.

In Japan, Pirates Of The Caribbean 5 added another $1.1m in its seventh weekend of release, dropping by 7% from last weekend and taking the running total there to $54.8m.

The documentary An Inconvenient Sequel: Truth To Power opened in Australia on $135,000 at 71 locations. Al Gore’s sequel debuts in the UK this week.