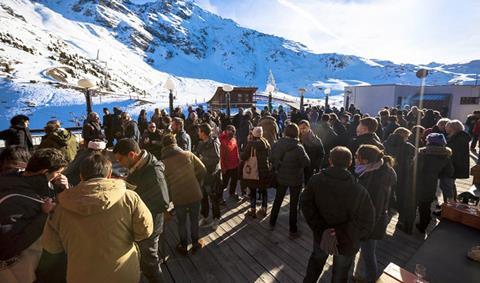 During the week-long event, 16 works in progress were screened, 21 further projects were presented at the Coproduction Village and discussion panels took in subjects including Europe-Quebec co-productions and the new generation of women filmmakers in Europe.

The effort to achieve gender parity in the film industry was at the heart of a panel featuring Swedish Film Institute CEO Anna Serner, Austrian director-producer Jessica Hausner (Lourdes), Belgian producer Diana Elbaum (Elle) and Stéphanie Halfon, author of the ‘Study of the Emergence of a New Generation of European Women Filmmakers’, which was presented at Les Arcs.

While Halfon’s study found that less than one in five films released in European cinemas between 2012 and 2015 were directed by women, a more heartening statistic was that, in almost every European country, the percentage of films directed by women is higher among the younger generations of directors.

One of the most significant figures is the 36.7% achieved by Sweden in 2015, a percentage that has more than doubled in three years.

“The strategy was not talking, but acting,” explained Serner. “We do not have quotas, we have a target, and the proof is that, in international festivals, we had more women directors than men directors. At the last edition of the Berlinale, for example, Sweden had more than double the entries of the other Nordic countries together.”

The Swedish Film Institute has also worked to get more women into key posts in the industry, and, for female film-makers in particular, on a track that does not leave them behind after their debut film.

Hausner noted that, as a female film-maker working in a “patriarchal system”, she found “it is hard to build up your self-confidence” having to pitch her projects to male producers and financiers the majority of the time.

Belgian producer Elbaum explained her way of taking action, which is to set up a training programme designed to speed up the development process for women who may be juggling work and family. The programme follows four projects from the screenwriting phase to pitching at a market.

“We’re the only ones who can change it,” said Elle’s producer. “Talent is there.”

The realities and opportunities for collaboration between Europe and Quebec were on the table at the panel ‘Co-producing with Quebec’, moderated by Screen International. Two case studies illustrated the topic: Philippe Faucon’s Fatima, which premiered in Directors’ Fortnight at Cannes in 2015; and Fulvio Bernasconi’s Misery.

The panel included the producers of both films: Nadim Cheikhrouha from France’s Tanit Films and Serge Noel from Quebec’s Possibles Media for Fatima; and Jean-Marc Frohle from Switzerland’s Point Prod and Nicolas Comeau from Quebec’s 1976 Productions for Misery. They were joined by Julie Morin, head of business relations at Sodec, Quebec’s provincial government funding body.

In Fatima’s case, a French production set in France, Quebec’s involvement might not have been obvious from the start but, noted Noel, “[getting involved] came from a desire to have this film exist. The participation of Sodec was instrumental in keeping this project alive and we were then able to complete the financing.”

Even though the film did not shoot in Canada, Noel explained, “Sodec supports minority co-productions with the idea of fostering the place of Quebec producers in the international scene as co-production partners.”

Misery, on the other hand, was a film with Canada in mind from the beginning: a thriller that involves Quebec’s native communities and landscape as key elements in the story.

Once Frohle had raised more than half the finance in Switzerland - a requirement before an application could be made to Sodec - the Quebecois fund and Téléfilm Canada quickly came up with the rest of the money “and then we were able to shoot pretty quickly”.

While Fatima filmed in France, Misery was shot entirely in Canada with a significant number of local crew, many of who had just wrapped X-Men: Apocalypse.

The panellists agreed the tax credit and experienced crews work in Quebec’s favour.

Producers on both sides expressed their confidence Canada’s expected admittance to the Eurimages development fund will increase the opportunities for co-productions.