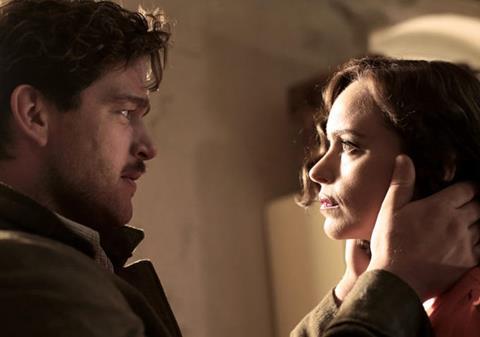 Christian Petzold’s collaboration with the actress Nina Hoss reaches a new level of intensity in Phoenix, a moving drama set in the rubble of post-war Berlin. Calling to mind both Hitchcock and Reed, this is an intimately-staged story of identity and loss in which Petzold compels the viewer into a suspension of disbelief which is fully rewarded with a powerful finale.

As with Barbara, Hoss delivers a very internalised performance, but her physicality as a battered and bent survivor of the Holocaust is highly affecting.

Phoenix is surely set for a steady art-house run in all markets, and could widen Petzold’s fanbase from Barbara and Jerichow into something approaching The Lives Of Others, given the right opportunities and awards notice. Even though it references a lengthy cinematic canon (culminating in Almodovar’s The Skin I Live In), the deliberately low-key and beautifully-observed Phoenix should be influential and duly referenced in its own right.

Phoenix deals respectfully with the immediate aftermath of the war and the shattered sole survivors of the camps who flood into a ruined Berlin like ghosts. It subtly reveals the pain of the Holocaust in an intimate, enigmatic manner - Petzold stresses emotional authenticity in his approach, even as the story flirts with fantasy, and the tension between the two elements keeps the viewer on the edge throughout.

Nina Hoss’s performance is compelling, and she is ably balanced by Nina Kunzendorf and in particular Ronald Zehrfeld, who also starred in Barbara and made a strong impression in this year’s Afghanistan drama Inbetween Worlds at the Berlinale. As with Barbara, Hoss delivers a very internalised performance, but her physicality as a battered and bent survivor of the Holocaust is highly affecting.

The story starts as Lene (Kunzendorf), who has survived the war in Switzerland and now works in Berlin repatriating survivors of the death camps, brings the shattered Nelly Lenz for surgery on her disfigured face. Nelly will never look the same as before the war, when she was a singer, and Nina wants them both to flee to Palestine and leave the death, decaying and decadence of Berlin behind.  Unresolved questions surround their relationship, but Lene is not as powerful as she originally appears.

As the sole surviving member of her entire family, Nelly finds that she is unexpectedly rich. And as the bandages slowly come off, she longs to find her husband Johnny (Zehrfeld), although Nina warns that Johnny is the man who betrayed her to the Nazis.

Frail and ghost-like, Nelly searches through Berlin at night and eventually arrives at a club in the American sector, called Phoenix. There she discovers Johnny, who doesn’t recognise her. He does see in her, however, a resemblance to his late wife, and a way to get his hands on her inheritance – they’ll pretend she is Nelly and split the proceeds of the scam. Nelly reluctantly agrees. Thus Johnny teaches her how to be herself, and in process, Nelly begins to rise from the ashes of war.

Petzold requires the audience to accept that Nelly would conspire in Johnny’s scheme, and it’s a big ask – mainly of Hoss, who must force this narrative difficulty through with her powerful performance. Petzold will reward believers though, with an emotional payoff, and deliciously lingering, unanswered questions.

As with Barbara, Petzold shoots in a restrained, intimate manner – tight interiors, darkened ruins, and some lush green spaces punctuated by train tracks – an ever-present reminder of Berlin’s recent past. Hans Fromm’s images are contained, yet easily identifiable.

But in Phoenix, the bar, Petzold strikes a post-Lili Marlene, Cabaret-era decadence with a striking double act who perform Night and Day for the soldiers. A haunting, jazzy score infuses Phoenix, the cello plucks at the veins of the piece, leading ultimately to Speak Low, the Kurt Weill jazz standard from 1943, which is awarded a new, eternal life here.