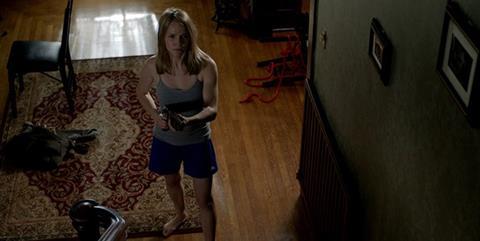 Proxy boasts some initial promise as a wilfully bizarre psychological thriller, but soon it becomes apparent that the weirdness is only skin-deep and the ideas rather shoddy. Director Zack Parker has concocted a zigzagging tale about grief and revenge, but stilted acting and an unintentionally campy tone deaden whatever serious points the filmmaker hoped to make.

Proxy proves less inspired as it stumbles forward, burdened by bland, melodramatic characters who must respond to the blood-soaked plot surprise.

Proxy has limited theatrical prospects due to its lack of stars or marketable hook. But its idiosyncratic personality may attract the attention of niche festivals, with a possible future as a cult curio in the cards.

The movie begins with a brutal, tragic act. Single, pregnant and lonely Esther (Alexia Rasmussen) is two weeks from her due date when she’s viscously assaulted in the street, her assailant knocking her unconscious, stealing her money and — most cruelly of all — repeatedly bashing her stomach with a brick, killing the unborn child.

In an attempt to put her life together, Esther joins a support group, where she meets Melanie (Alexa Havins), whose husband and young son were killed in a car accident. The emotionally shattered Esther finds in the assertive, optimistic Melanie a reason to keep going — a sentiment that’s called into question when, a few days later, Esther observes her new friend from a distance at the mall, clutching the hand of the son she had told Esther was dead.

That setup suggests some of the odd, jarring twists that Proxy will take. But its biggest surprise happens soon after: a bloody altercation that shifts our perspective on what we’ve seen and forces us to question who really is the main character of the piece.

These narrative hairpin turns have potential at first, leaving the viewer disoriented and convinced that just about anything could happen next. Sadly, though, Proxy proves less inspired as it stumbles forward, burdened by bland, melodramatic characters who must respond to the blood-soaked plot surprise. Parker keeps adding new information about his protagonists — someone has a secret gay lover, somebody else has an itchy trigger finger — but Proxy’s overly grave tone produces many unintended chuckles because of the building absurdity of the solemn proceedings. This is especially ill-advised when you consider that one character’s death is later amended without explanation — a possibly surreal or playful touch that, in Parker’s self-serious hands, is merely meant to underline the depth of the other characters’ need for vengeance.

The cast goes along with Parker’s dark, overheated style, but the performances don’t have the chops to add the vitality or ambiguity necessary. Rasmussen and Havins are both a bit wooden and hammy, and micro-budget director (and occasional actor) Joe Swanberg doesn’t fare much better as Melanie’s humourless, intense husband. For as much as Proxy’s plot strains to misdirect and confound our expectations, its actors are disappointingly straightforward, their earnest portrayals of such increasingly risible characters a deficiency that no twist can overcome.

From a technical standpoint, Proxy is hamstrung by its low budget, which gives the production a vaguely amateurish quality. However, the aforementioned secret plot surprise does occur in a scene where Parker (who also edited, co-wrote and co-produced the film) displays a little flare for operatic, slow-motion carnage. Still, even in that moment, one wonders if the filmmaker realises how funny his overwrought style plays.