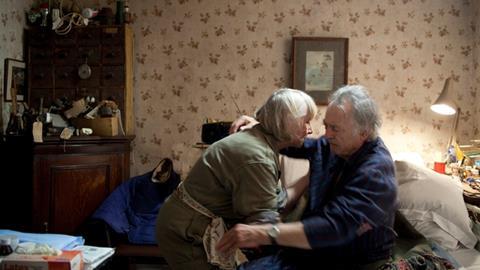 Radiator is a small, tender, yet pleasingly acerbic film driven by an affecting lead performance from 87-year-old actor Richard Johnson – who should be an awards natural for those who can bear the darkly touching truthfulness of his performance.

In a powerful reminder of just what a great actor he is, Richard Johnson gives us a Leonard who is by turns tyrannical and petulant, irascible, sardonic, needy, funny, terrified – a fragile bully.

Shot for a mere £145,000 in the Lake District and London,Radiator faces a distribution hurdle due to its no-frills filming style coupled with a subject matter of elderly, not-entirely-sympathetic parents. The fact that Eon’s Michael Wilson and Barbara Broccoli serve as executive producers may help (Rachel Weisz is also listed as an executive producer). This is a touching film, thoughtful, and often poetic, which deserves to be seen, even if it’s on a small scale. Radiator has a truthful, off-key ring, which is both a blessing and a curse, as it makes the film all the more poignant despite its cheery tone.

Radiator deals with an elderly, eccentric couple who live in a prison of their own clutter, and their relationship with their middle-aged son. More interestingly, it bounces off the walls of guilt and duty, and how we remember the past. The actor Tom Browne directed and wrote the screenplay, based largely on his own life experience – it was shot in his late parents’ claustrophobic home.

Daniel (a very watchable Daniel Cerqueira) is summoned from his job in London to his family’s Cumbrian squalor to help Maria (Gemma Jones), whose husband Leonard (Johnson) is refusing to move from the couch. We only know later on in the film that they are his parents – all three keep each other at arm’s length and soldier on hopelessly as mice and rats make ever-increasing claims on the house.

In a powerful reminder of just what a great actor he is, Richard Johnson (a matinee idol from the 1950s and star of the Bulldog Drummond films) gives us a Leonard who is by turns tyrannical and petulant, irascible, sardonic, needy, funny, terrified – a fragile bully.  He hits all the notes in an understated performance which is also physically vulnerable and brave. Leonard’s relationship with Maria is a mystery to their son, as it always has been, and she alternates between wanting to escape and feeding her husband’s neediness. The downtrodden Daniel also wants to get away – in fact he does, at one stage, run away from home – but the guilt is over-whelming.

Radiator is quite a short feature, at 93 minutes, and a little stretched at times to even make that running length. But it’s well-observed – musical notes are held back to Schumann’s piano,  and the camera takes some interesting, cramped, observational positions (in particular during a bathroom sequence). Small though it may be, at its heart are some of life’s great mysteries, which start with our parents’ relationship and end with the wonder – was it all really as we remember? So Radiator – which refers to a joke, not to the cold – is not so small in the end.