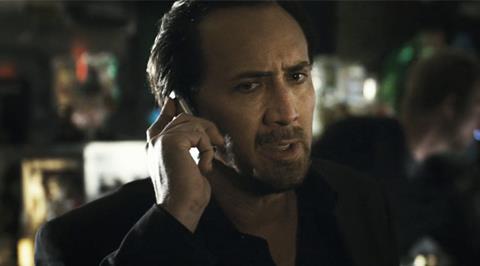 There is a grim and dark tone to Spanish director Paco Cabezas’s first English language film, which sees Nicolas Cage in a mournful and murderous mood and while rich on atmosphere, style and gunplay somehow lacks a heart – or least a knowing sense of humour – to set it apart from any number of tough revenge tales.

Cage is suitably intense and driven as Paul, and while the support cast are pretty by the numbers and clichéd, at least Pasha D. Lychnikoff brings some charisma and intelligence to Russian mobster Chernov.

But despite that, there is something always watchable about Nicolas Cage when he takes off his suit, puts on a leather jacket and heads out into the night with dark deeds on his mind. Rage, which could have easily headed into Taken territory, at least sticks to its tough thriller agenda with its tale of redemption at least having some nice twists as it hits its nicely staged low-key climax.

Cage plays Paul Maguire, a wealthy property developer with a criminal past. But he has put dark days behind him and lives happily with his daughter Caitlin (Aubrey Peeples), who he’s raising with his second wife, the much younger Vanessa (a slightly wasted Rachel Nichols). He is desperately protective of Caitlin, worries about leaving her alone – even with friends – and is busy planning her 16th birthday party.

While out at dinner with friends one night he is tracked by gentle detective St. John (Danny Glover), who knows Paul from his gang days, but is there to yell him that Caitlin has apparently been kidnapped during a home invasion while at the family house with two friends.

Assuming it is a link to his run-in with the Russian mob from years before, Paul heads to his old gang friends Kane (Max Ryan) and Doherty (Michael McGrady), with whom he is still buddies, to get help in finding her. But when her body is found Paul is mortified. At her funeral he talks to his wheelchair-bound former boss O’Connell (played by Peter Stormare with a Swedish/Irish accent, which is rather disconcerting) who simply tells him to stay clean.

Of course he can’t, and when he finds out she was killed by a Russian Tokarev handgun (the film was originally titled Tokarev) he figures her killing is linked to a crime he, Kane and Doherty were involved with 15 years earlier.

But Rage cleverly heads into more twisted territory. Paul, despite appearing a simplistic revenge-driven man in the surface, is more complex. Caitlin represents the amount of years he has been living a normal life and is a symbol for the new man he has become and with her gone he reverts to type and is also forced to fully examine the crime he committed. Cage is suitably intense and driven as Paul, and while the support cast are pretty by the numbers and clichéd, at least Pasha D Lychnikoff brings some charisma and intelligence to Russian mobster Chernov.