It’s a familiar story, but Jean-Bernard Marlin finds new emotion in this drama set in the Marseilles underworld 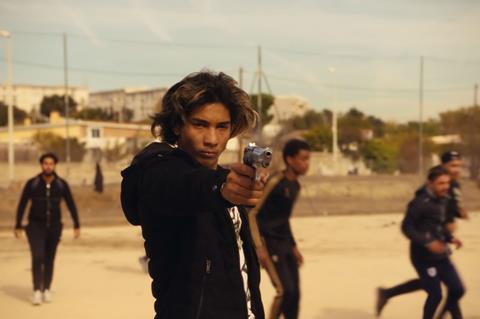 The mythical Scheherezade told a thousand and one stories, while French street drama Shéhérezade tells one story that’s been told many times before – about youth on the skids and the precarious hope of salvation. But while its theme may be over-worked in French cinema, this tough debut feature from director Jean-Bernard Marlin evokes its world – that of a young North African Marseilles underworld - with hot, nervy intensity, genuine emotional charge and an impressive non-professional cast. Theatrical prospects may be modest outside France, but festivals and other outlets, especially with young constituencies, will pick up on a film that has no shortage of freshness and vigour.

The action is set around the gritty Rotonde and Belle de Mai neighborhoods of Marseilles, where 17-year-old Zachary (Dylan Robert) is newly released from a juvenile facility in which he has spent some time for his involvement in thefts. His unreliable mother isn’t there to meet him, and he sneaks out of a care home to see the people he feels are his only friends – young buck Ryad (Idir Azougli) and his brother Mehdi (Kader Benchoudar), a local hood. Zachary ends up with a slab of hash in his pocket – which is quickly stolen by Shéhérezade or Shera (Kenza Fortas), a teenage prostitute. She and Zachary are soon at daggers drawn but go on to form a tender bond, and he shacks up with her in the squalid digs she shares with a crack-smoking transgender colleague.

Zachary soon finds himself becoming pimp to Shera and the other hookers on her corner. When the girls face tough competition from Bulgarians with heavy protection, Zachary does a deal with Mehdi to take control of their rivals’ territory – and ends up running his own mini-empire and enjoying a life of fast bikes and nightlife. At this point, the film begins to shift into crime genre territory, even gets close to becoming A Prophet, Junior. The more overt genre elements briefly make the film more ordinary, but in the final act, a return to the tender realist register of the start make for an emotionally satisfying, if hardly unpredictable ending.

The film’s trump card lies in its bustling cast of young Maghrebin non-professionals, largely recruited in street casting and giving very believable performances, variously relaxed and hyper-energetic as a result of extensive workshopping (some adults, including lawyers, play their own roles in real life). Young leads Robert and Fortas are terrific, bringing depth and nuance to what could easily have been off-the-cuff roles. Robert is highly watchable with his gangling manner and lion’s mane of bleached hair, although his manner sometimes comes too close to languid skater cool to suggest that his Zachary could really have the energy to launch a criminal career.

Unfortunately, the drama doesn’t quite stand back far enough from the blinkered macho viewpoint of Zachary and his peers, while the female perspective suggested by the title never really opens up: there’s a whole other story to tell about Shera’s background that remains tantalisingly untouched. Also making the film visually distinctive, sometimes markedly skewing it from its ostensible realism, is photography from up-and-coming star DoP Jonathan Ricuqebourg (The Death of Louis XIV, The Challenge). He provides a striking, often expressionistically hot palette of blazing hues dominated by orange – although at moments, the emphasis on lens flare could give J.J. Abrams a run for his money.