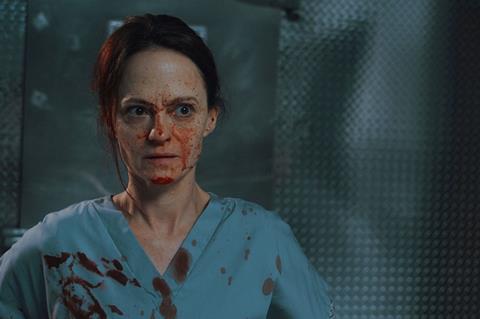 Awash in bloody organs and scheming characters, writer-director Brea Grant’s grisly dark comedy 12 Hour Shift ends up being more frenetic than inspired. Angela Bettis is superbly world-weary as an emergency-room nurse whose black-market dealings are about to ensnare her in a world of murder and chaos. The pileup of bad behaviour that takes place around her over the course of one hectic night in a hospital can occasionally be wickedly funny, although the madcap plotting eventually grows tiresome. It turns out that if you’ve seen one severed kidney, you’ve seen them all.

Not one for the squeamish

With Magnolia’s horror label Magnet Releasing holding worldwide rights, the film now screens as part of Fantasia. Given its high body count and macabre sense of humour, 12 Hour Shift is strictly a genre affair, catering to Bettis’ fanbase, loyal since she starred in the 2002 cult horror classic May. It’s definitely not one for the squeamish.

Set in Arkansas in 1999, 12 Hour Shift introduces us to Mandy (Bettis), an exhausted nurse who is about to start a gruelling overnight shift at the hospital. But it’s not just the long hours that are weighing on her: she’s addicted to her job’s freely-available pharmaceuticals, and she supplements her measly income by selling organs to some local crooks as part of a shady trafficking operation. But tonight’s shift will prove especially harrowing after her dim-witted cousin Regina (Chloe Farnworth) botches the clandestine organ delivery, forcing the two women to find another possible corpse to replace the prized kidney — otherwise, the villains may just take the organ out of them.

In her second feature, Grant (Best Friends Forever) ambitiously mixes farce, horror and crime thriller, constantly raising the stakes as Mandy discovers just how hard it is to secure a fresh kidney, even in a hospital. There are potential (albeit unwitting) donors throughout the building, but with other nurses (and, eventually, the cops) roaming the hallways, she has to be careful. Her caution means little, however, since the panicky Regina decides to simply don nursing scrubs and seek out the bedridden patient who looks closest to death. (As Regina will find out, though, it probably isn’t wise to kill a man on dialysis.)

There’s a gruesome frivolity to 12 Hour Shift — with Bettis as the troubled but resourceful centre of this rapidly devolving nightmare scenario — but all the hijinks and death scenes ultimately don’t have much point beyond their sheer outlandishness. As a result, the film starts to feel mechanical as Mandy must keep one step ahead of her cousin, the crooks, the hospital administration and whoever else might uncover her black-market operation. (At the same time, 12 Hour Shift features a fleet of hospital patients who are barely fleshed out — including a campy David Arquette as a demented criminal who gets loose and starts wreaking havoc.) Bettis expertly taps into the anxiety of an amoral nurse who’s gotten in way over her head — her life such a blur of pills and crime she can’t see straight — but it’s as close as this picture gets to a semblance of emotional shading.

The supporting cast tends toward zany types that are only fitfully amusing. British actor Farnworth makes for a credible Southern redneck, but Regina’s idiocy rarely surprises or delights. As a hapless policeman, Kit Williamson is another cog in Grant’s overly intricate narrative construction. By the time the sun comes up on a new day and Mandy has navigated yet another shootout or fight to the death, 12 Hour Shift has long since lost its initial novelty and sense of mischief. It’s a film about organ-harvesting in search of a heart.