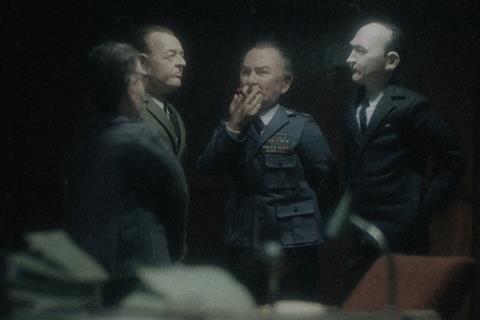 The ghosts of Polish history haunt the documentary screen to eerie effect in Tomasz Wolski’s unsettling and revealing hybrid film 1970. Recalling a historic popular protest in Communist Poland, and the brutal response of the authorities, the film — premiering in the international feature competition of Visions du Reel — is the latest work from a prolific documentarist whose films include Palace (2012) and last year’s An Ordinary Country, about Poland’s history of secret service surveillance. The question of power and its relation to the populace is further explored in 1970, with its unusual approach of juxtaposing black-and-white archive footage with stop-motion animation that evokes dark dealings within Poland’s government. The two modes do not quite gel satisfactorily, but their combination makes for a provocative film that should win exposure on discerning platforms spanning the range of documentary, animation and human rights interests.

Wolski’s topic is the demonstrations in Gdansk, Gdynia and other cities, spurred in December 1970 by the decision of the Polish government, then under Wladyslaw Gomulka, to raise food prices shortly before Christmas. This led to strikes and demonstrations, then to Gomulka’s resignation, and 10 years later to the emergence of the Solidarnosc trade union. With thousands massing to protest in Gdansk, the Ministry of Internal Affairs assembled a ‘crisis team’ to address the unrest.

As summarised in closing titles — information is provided in the film through sparse captions — the consequences were catastrophic, and it took 24 years, including 18 years of court proceedings, before the public naming of those responsible for the resulting massacre. Six of those people, including Minister of Interior Affairs Kazimierz Switala, are represented here in the form of puppets, seen meeting and making phone calls in a set of vividly recreated offices and palace rooms.

The words we hear in these sequences are recordings of the team’s telephone conversations as they update each other on developing events — although it’s hard always to tell how reliably. What’s clear is that the government is terrified of public discontent: while official announcements denounce “enemies of socialism” and urge TV viewers to “think of the state,” we also hear how ruthless the authorities are prepared to be in their effort to quash dissent and to limit the spread of news. At one point, the officials discuss a possible plan to organise a car accident for the Finnish consul, who has photos of the events.

Most bluntly, one official says, “Just kick the crap out of them.” And that is what the authorities did, with massive use of chemical weapons, and the deployment of 27,000 soldiers and 9,000 further militia. Forty-one people were killed, 1,164 injured and over 3,000 arrested, with some of the victims (named in a closing roll call) as young as 15; the film’s most shocking images come at the end, as we see people, many in their teens, arrested and beaten.

There is an uncomfortable disjunction in the film between the archive material and the puppet sequences, under the aegis of animator Robert Sowa. The puppets are realistic, in a spare, sketchy way, rather than grotesque or stylised (closing photos show how much they resemble the originals). They generally move little, sometimes fixed in static tableaux, as the camera slowly glides past them, occasionally making small, telling gestures like drumming their fingers amid effects such as shifting light or swirls of cigarette smoke.

They are caught in a ghostly, frosted light, a stark contrast to the harsh black-and-white archive images, and occasional extreme close-ups, with shifting planes of shallow focus, scrutinise telephone cables. A shot under a table shows dust and debris, as if we’re seeing not just a meeting of grey apparatchiks, but a conference of the undead. It’s rather as if those uncanny animators the Quay brothers (seemingly a stylistic influence here) were remaking a Costa-Gavras film or adapting John Le Carre — although the closest direct comparison for the use of dolls in a political documentary context might be Rithy Panh’s Cambodian essay The Missing Picture (2013).

Yet the animation is so striking that it risks distracting attention from the 1970 footage, which recounts the protests in a discontinuous fashion that’s not always easy to follow — the facts sometimes obscured because direct commentary on the course of events comes primarily from the officials’ discussions. Moreover, the film’s two strands are so different, in visual texture and in mood, that they don’t entirely feel merged into a single cohesive work.

There will certainly be much interest in 1970 in that it emerges at a timely moment, as political unrest around the world — and often heavy-handed official response — fills the news. This case of Communist-era atrocity will also strike a chord with anyone who has seen Andrei Konchalovsky’s Dear Comrades!, a fictionalised account of similarly brutal suppression of protest in the USSR in the early ’60s.

The film is bolstered by a quietly insistent electronic score by Bartlomiej Tycinski and DJ Lenar, its electronic pulse chiming perfectly with images of an economically depressed industrial Poland that may fit universal preconceptions of a grey Iron Curtain landscape, but that the film nevertheless suggests are entirely rooted in reality.