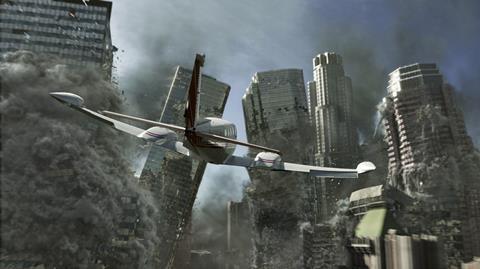 Roland Emmerich’s apparently limitless appetite for gigantic effects-driven B-movies continues unabated with the disaster epic to end all disaster epics, a deliriously ludicrous, guilty pleasure of a blockbuster in which the end of the world is turned into a two-and-a-half-hour rollercoaster ride. Echoing virtually every disaster movie ever made from Earthquake and The Poseidon Adventure to Deep Impact, Volcano, The Core and Emmerich’s own The Day After Tomorrow, 2012 is shamelessly derivative but no less diverting for it.

Gigantic returns are assured for Sony Pictures which financed the film in return for worldwide distribution rights. The Day After Tomorrow grossed $187m in domestic and $357m internationally and 2012 should do similar business, especially once the intriguing plot twists about who will survive Emmerich’s apocalypse come into the public domain.

2012 is shamelessly derivative but no less diverting for it.

You’ve got to hand it to Emmerich, a showman whose passion to create spectacle recalls Griffith or DeMille. The scale of 2012 is awe-inspiring even while many of the thousands of effects shots are old-fashioned and often cheesy. But if he’s not a perfectionist along Cameron lines, he knows how to dazzle mass audiences with images and concepts (leaving aside his pedestrian characters and soapy human stories).

The “science part” at the beginning of the movie sees Adrian Helmsley (Chiwetel Ejiofor), America’s foremost scientist, arriving in India in 2009 where he is told by a colleague (Jimi Mistry) that the earth’s core is heating up at a dramatically increased rate. Within a few years, he says, the core will start to shift, creating devastation on the earth’s surface. As the Mayans predicted, the world looks like it will come to an end in 2012.

Helmsley immediately takes the news back to the US government which sets in motion a bold plan to save the human race from the upcoming catastrophe.

The film’s human component is chiefly occupied by John Cusack as a failed writer called Jackson Curtis who lives alone in Los Angeles, working as the chauffeur for a Russian billionaire and occasionally seeing his kids (Liam James, Morgan Lily) by his ex-wife Kate (Amanda Peet) who is now remarried to Gordon (Thomas McCarthy).

On a weekend with his children in Yellowstone National Park in 2012, Jackson comes across soldiers protecting the park and meets Helmsley as well as a crazy conspiracy theorist and DJ (Woody Harrelson) who says that the end of the world is nigh.

After the supermarket they are standing in is literally torn apart by an earthquake, Kate and Gordon ask Jackson to return to LA with the children. Once there, he realises that the entire west coast is about to blow and that his Russian employer is headed to a top secret location where escape ships have been constructed.

Meanwhile the president (Danny Glover) has opted to stay behind in Washington DC, leaving his daughter (Thandie Newton) to go with Helmsley and chief of staff Oliver Platt on Air Force One to the escape ship destination.

Emmerich goes all out in his pictures of doom – the dome of the Vatican collapses into a packed St Peter’s Square, the Corcovado disintegrates and tumbles down across Rio, an aircraft carrier is borne on a tsunami wave to crush the White House, Las Vegas is rent asunder, an ocean liner is turned upside down by a tidal wave of monstrous proportions (sound familiar?). But the devastation is also laced with tongue in cheek humour – in depictions of Schwarzenegger, the Queen and Angela Merkel, in jaw-dropping escape sequences, and in the two dimensional characters like Platt and Harrelson who cannot be taken seriously.

At 150 minutes, the film outstays its welcome, especially in the exhausting finale on the escape vehicles. Still, if excess is Emmerich’s biggest crime, at least he always indulges it with a genuine zeal to take audiences to a level of popcorn wonder they haven’t been to before.