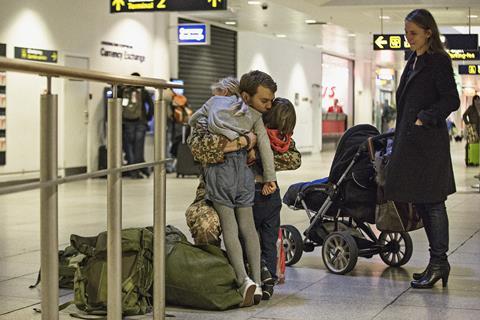 A modest drama about a Danish officer serving in Afghanistan, Tobias Lindholm’s  A War (Krigen) may avoid the crucial issue that lies at the heart of his film, namely what a Danish soldier is doing thousands of miles away from home, fighting the Taliban that is no immediate threat to his own country. But at the same time, while shunning all the heroic pyrotechnics associated with this genre, he lays bare the moral and ethical dilemmas his main character, and many like him, have to face, raising questions that have no immediate or available answer.

At first glance far less exciting than any of the Eastwood, Bigelow or de Palma forays into the same territory, Lindholm’s (A Hijacking), film takes the director’s personal perspective of a young Scandinavian liberal who grew up in a protected environment. But his point of view will no doubt resonate in many other corners of the world where young people are sent to fight wars that might be politically acceptable but are not easily justifiable on a personal level. Despite its title, A War is more of an arthouse item than an action movie.

Claus Petersen (Pilou Asbaek, who also played the lead in Lindholm’s first two films) is a company commander with a Danish unit in Afghanistan who feels he needs to boost the morale of his troops by joining them on their daily patrols. Though he and his men are indoctrinated to believe their presence in such a remote corner of the world is to befriend and protect the local population from the threat of extremist rebels, in this case the Taliban, they are also fully aware of the dangers looming behind every corner and in every abandoned shack.

In such circumstances, the commanding officer feels his duty is first and foremost to ensure the safety of his soldiers and to treat all Afghans, without distinction, as potential enemies in disguise - even if by doing so, he subjects them to brutally humiliating procedures before allowing them to go on. As for making friends with the natives, it’s fine to promise them medicine and support but when they come to the army compound to ask for shelter from the Taliban, the rules state that they must be turned away.

All this may seem like routine up to the day his unit is caught in crossfire and he needs to evacuate his wounded before he loses them altogether. In the heat of the battle, the commander takes a decision that will later on bring him before a court of law.

Far away, at home, Claus’ wife, Maria (Tuva Novotny) is waging her own war, trying to cope with three young children and her own job while waiting for her husband to return. Objectively speaking, her plight might look insignificant compared to the life and death issues at stake for Claus, but seen through the eyes of someone who has never experienced it the act of taking a person out of his home and away from his family can be as heavy an issue as the war he has been sent to fight.

Of course, one might wonder why he was sent there, or as Lindholm points out, why has Denmark been “a nation at war” for the last 14 years when no one seems to threaten its security, but that is not the issue at hand. This is about how a Danish soldier conducts himself once put in this position.

Shot in Turkey, with Afghan refugees and former Danish soldiers playing many of the supporting parts, Lindholm tried to get as close to the real thing as he could and at the same time observe it all from a safe distance, a position that defuses much of the dramatic impact. The script’s tendency to draw parallels between crises at home in Denmark and on the Afghan front may often look disproportionate, and in the course of the final court-martial, Lindholm’s own sympathies come through in a manner that might not please the politically correct.

A firm believer in “less is more”, Lindholm tones down both acting and editing, with the exception of the chaotic crossfire incident, to focus once again on the one theme he is fascinated with, man under pressure. It has always been the same, whether in his own films or in scripts he has written for others, such as Thomas Vinterberg’s The Hunt.