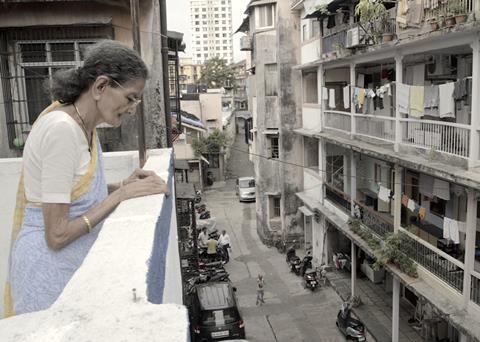 Making a film is always a courageous undertaking, and it’s often braver to turn the camera inwards. With her feature debut, India’s Archana Atul Phadke embarks on a no-holds-barred exploration of the dynamics of her own multi-generational home in South Bombay, with a particular focus on marital relationships and cultural shifts. While it may be intimate in scale, Archana’s frank approach and eye for detail make for an absorbing, eye-opening and moving family portrait. Premiering at this year’s Sheffield Doc/Fest, where it won the New Talent award, About Love should enjoy a healthy festival run. Theatrical prospects may be limited, but streaming or broadcast platforms could see the film reach an appreciative audience.

Archana has a knack for holding her gaze as quiet, unassuming moments turn into something far more poignant

An opening sequence drops us straight into a lively conversation Archana is having with her sister Sagarika as they drive through Bombay’s multiplying high-rise towers to the more modest home that has been owned by their family since 1902. The two banter about the pressure they feel to get married and settle down — while the fact that neither wants to isn’t particularly shocking, certainly to a modern Western audience, it does become increasingly understandable the more time we spend in their home.

With three generations living under the same roof, the handsome three-storey household is an immediate buzz of activity. Family members jostle and tease; arguments flare up and die away; the house becomes more frenzied as the wedding of Archana’s brother Rohan approaches. (The 28-year-old Rohan, it should be noted, will be the first Phadke man in over 100 years to move out of the house and set up his own home.) Yet Archana has a knack for cutting through the noise to focus on the — often repressed — feelings below the surface, holding her gaze as quiet, unassuming moments turn into something far more poignant.

Carefully, sensitively, she opens the veins of history running through the heart of this family (and millions of others like it), exposing the beliefs and behaviours that are particularly apparent in its men. Archana’s 87-year-old grandfather Madhav is the very definition of old-school patriarchy; barking orders and sexist insults at Neela, his wife of 68 years, his ego remains unchallenged by either her exasperated retorts or his own worsening health. That he knows no better is clear. “There was a time when husband was everything,” he laments.

Moving up a floor, and a generation, Madhav’s son Atul is perhaps not as openly bullish as his father, but habitually forces his wife Maneesha into a subservient role she is clearly unhappy with. “I can’t use my brain when I’m around him,” she says. Archana spends the most time with Maneesha, slowly encouraging her mother to lay bare the feelings of entrapment and frustration that co-exist with the love and pride she feels for her family.

With Indian tradition insisting that women marry young and move into their new husband’s family home to cook, clean and raise children, a sense of regret resonates through Maneesha and Neela’s every jokey comment, every resigned sigh. That the affection between the married couples is real, and palpable, doesn’t detract from the idea that, for these women, love has been as much about duty as as emotion. Crucially, though, these issues are not soapboxed by Archana, rather allowed to surface over the time she spends simply observing her family. And, as she and her sister determinedly fight back against a patriarchal system that would put seek to put them in an uncomfortable position, there is a sense that real cultural change may be joining those high-rises on India’s horizon.