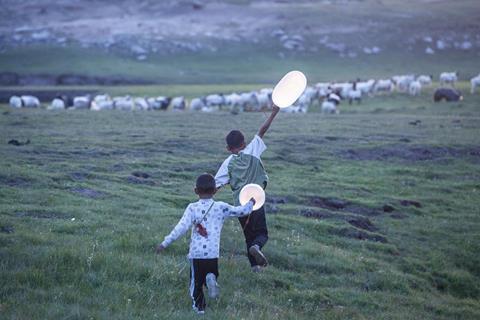 Love, death, reincarnation and sheep – many, many sheep – make a poetic and philosophical mix in Balloon, the latest film from Tibetan director and author Pema Tseden, whose last film Jinpa won Best Screenplay Award in Venice’s Horizons section last year. A less fanciful brew than the genre-tweaking, narratively twisty Jinpa, Balloon is a family drama in a realist mode, with a strong quasi-documentary ethnographic streak. But it also has a pensive philosophical dimension and a style that is open to moments of reverie verging on magic realism.

The film doesn’t have either the narrative focus nor the surprises of Jinpa, coming across as a more familiar exercise in Asian rural fiction

The Tibetan-language drama also shows Tseden as a terrific director of both professional and non-professional actors, with the intimacy between the members of a shepherding family emerging as one of the richest aspects of this modest but maturely charming piece.

The film starts off in larky mode as the two young boys play with balloons they have blown up – except that they are taken from the dwindling supply of condoms belonging to their parents. This has repercussions for Dargye, who finds himself getting into an argument with an angry local dad shocked at the boys’ behaviour – leading to a somewhat John Fordian punch-up in a trough of sheep dip.

Introducing a more contemplative theme is the return to the family home of Droklar’s sister Shangchu Drolma, a.k.a Ani (Yangshik Two), a young nun who stops by Jamyang’s school to collect him – only to run into his teacher Dakbum Gyal. This solemn young man, it turns out, once broke Ani’s heart – apparently the reason she became a nun. He presents her with the novel he has written about their relationship – entitled ‘Balloon’ – which sets the young woman soul-searching for much of her stay. Then Grandfather dies, raising the question of when his soul will be reincarnated. The likely answer becomes a hotly contested issue in the family, leaving Droklar in particular to make a difficult choice in relation to official Chinese policies on family planning.

A constant background to all this, providing humour as well as cultural detail – and also bringing human existence into parallel with the processes of nature – is the presence of the family’s herd of sheep, and of a newly acquired, magnificently horned and highly priapic ram. The film’s expansive landscapes, magnificently shot in assorted frosted hues by Jinpa DoP Lu Songye, are all the more striking when sheep are running in every direction over them, flowing across the plains like woolly streams of mercury.

Shifting its focus between characters, but coming to somewhat favour Drolkar and her dilemma, the film doesn’t have either the narrative focus nor the surprises of Jinpa, coming across as a more familiar exercise in Asian rural fiction, rather in the vein of Sergei Dvortsevoy’s Tulpan or Wang Quan’an’s recent Mongolian story Öndög. For a while in the second half, its various threads being to feel overextended, and seem to be leading nowhere; but the open ending is given poetic lift by a final image provides a quietly resonant metaphor to leave us with.

Less stylised than Jinpa, with its knowing cowboy and road movie borrowings, Balloon occasionally mixes heightened beauty into its realism, with some vivid post-production colour work (e.g. yellow skies reflected in pools in blue-black earth) adding a dream-like feel. The cast is strong and intensely believable across the board, from the sparky younger boys, to Yangshik Tao’s romantically haunted young nun, to the parents who, for all their long familiarity, crackle with tenderness when they’re alone, and later show their fortitude when it comes to weathering some harsh emotional storms.

Apart from seasoned screen regulars Sonam Wangmo and Jinpa, the supporting non-professionals more than pull their weight, especially when it comes to handling (sometimes with very little ceremony) rebellious sheep. As for the animals themselves, when it comes to characterful screen presence they give more than three bags full.