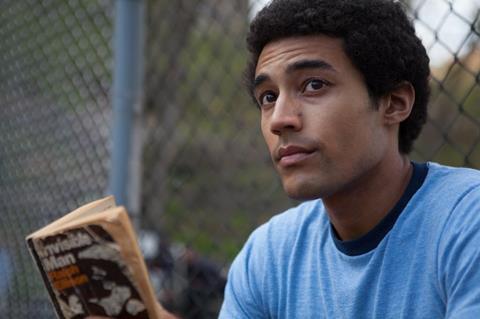 College is a time for many young people to find themselves — even the future leader of the free world. In Barry, director Vikram Gandhi looks at a pivotal year in Barack Obama’s life as he transfers to New York’s Columbia University. But in presenting its story as a portrait of a budding great statesman discovering his destiny, Barry is neither insightful nor poetic enough to justify its increasingly didactic approach.

Newcomer Devon Terrell’s agreeably prickly performance as Obama will be among Barry’s biggest selling points. With the US president leaving office early next year, there ought to be sufficient interest in another Obama biopic, even if it follows quickly on the heels of this summer’s indie success Southside With You. Still, Barry may be only a niche performer, with many prospective viewers probably seeking it out on VOD and cable.

Starting in August 1981, Barry watches as Barack Obama (Terrell) lands in New York to attend school, adjusting to life in a major American metropolis after bouncing around from Hawaii to Jakarta. Consistently uncomfortable because of his mixed race — he doesn’t feel entirely at home with either his white classmates or his black friends and neighbours — he begins dating a white co-ed named Charlotte (Anya Taylor-Joy), which only complicates his uncertainty about his identity.

Gandhi (Kumaré) and screenwriter Adam Mansbach imagine Obama at this age as a smart but searching individual who’s trying to reconcile the different parts of his personality. Even the fact that he goes by Barry rather than Barack indicates insecurity about his heritage.

Anyone familiar with Obama’s biography will recognise certain iconic character details in Barry — his smoking habit, his love of basketball, his distant relationship with his Kenyan father — although Charlotte is a fictionalised composite of different real girlfriends. And as part of the film’s poetic license, Gandhi theorises that Obama’s time in New York helped solidify the man that he would become, dropping hints about how his later work as a community organizer, senator and president were all inspired by the period dramatised in Barry.

Initially, the movie’s insistence on depicting its main character as just another college kid — albeit, an incredibly charming and eloquent one — gives the story a voyeuristic thrill as we look for clues to the future Obama. As played by Terrell, he’s a restless young man who is wary of entering new situations because he feels like an outsider. That lack of polish can make this Obama awfully appealing and human, even when his selfishness hurts those closest to him. And Terrell’s scenes with Taylor-Joy have the sort of flirty, nervous energy reminiscent of plenty of unpredictable college romances.

Unfortunately, as Gandhi begins to introduce the external obstacles that will test Obama’s sense of self, Barry becomes progressively dour in a manner that oversells the man’s momentousness. This is not to suggest that Obama isn’t a transformative, fascinating public figure, but that, rather, Barry tries so hard to give his inner crisis towering significance that the film turns its modest hero into a mythic, far-less-interesting character. No matter the racial prejudice he undoubtedly faced — mixed with the standard indecision about the future that’s common to undergraduates — Barry stops being lively conjecture about the roots of a magnetic politician, sailing unconvincingly into cause-and-effect melodrama.

Still, Adam Newport-Berra’s cinematography and Scott Kuzio’s production design ably illustrate the gritty, crime-infested New York in which Obama arrived. And among the supporting cast, Ashley Judd nicely sketches out Obama’s mother Ann Dunham in only a few scenes. Ann may embarrass her uptight son with her outspoken liberal politics, but she nonetheless exudes a compassionate temperament that will soon grow within him.