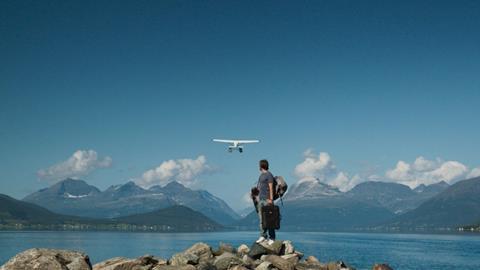 A young geologist seeks to make his name with the discovery of ancient meteor strikes in northeast Norway, but instead finds his body and mind nearly broken by the terrain he had hoped would furnish him with glory. Boudewijn Koole’s visually arresting adaptation of one of the most celebrated pieces of Dutch post-war literature, Willem Frederik Hermans’ Nooit Meer Slapen, benefits from a compelling, if not endearing, central performance from Reinout Scholten van Aschat. He plays Arnold Issendorf, the Dutch outsider on a field trip with three Norwegian geologists who silently judge him for his lack of hiking prowess.

Sleep-starved and struggling with the tough terrain, Alfred starts to descend into paranoia

The importance of Hermans’ novel in the Dutch cultural landscape and its enduring popularity since its initial publication in 1966 should ensure considerable interest in the film both in the Netherlands, and in Germany and Scandinavia, where the author is equally celebrated. However the fact that this adaptation, which opened the International Film Festival Rotterdam, dials down the droll humour of the book in favour of a nervy sense of building dread may affect its commercial prospects elsewhere. There’s also the issue that, while the novel is well-known in northern Europe, it was not translated into English until 2006. Beyond Sleep will likely be a tougher sell in anglophone territories where the source material hasn’t achieved an equivalent profile or reputation.

Alfred arrives in Norway full of dreams of professional glory. But the laconic response to his half-baked meteor theory from his Norwegian colleague and guide Arne punctures his enthusiasm a little. There are a few other issues niggling at him also. Alfred’s father, also a geologist, died during a similar trip to the one his son is about to undertake. There’s more riding on this expedition than just a thesis. Alfred feels the need to redeem the reputation his father lost when he fell into a ravine. There’s the fact that some aerial photos of the area that Arnold requested have been purloined by a rival. The perpetual half-light and Arne’s snoring mean that sleep eludes him. And to add to the suffering, every biting insect in northern Norway is queuing up to snack on him.

The situation is not improved by the fact that the two other geologists on the trip, burly, towheaded Norwegians called Qvigstadt and Mikkelsen, regard him with something that would be pity if it wasn’t so indifferent. Sleep-starved and struggling with the tough terrain, Alfred starts to descend into paranoia.

The striking cinematography by Melle van Essen makes the most of one of the film’s main assets: the impassive beauty of the mountainous Norwegian backdrop. The mist rolling wetly in from the valleys reflects the clouding of Arnold’s increasingly troubled mind. But it is the sound design that is really crucial. From the crunching bones as Arnold bites the head off a live trout, to the constant hectoring whine of insect life, to the aural hallucinations that plague him, the work by sound designer Mark Glynne is first rate.

The film is not without problems however, not least the fact that weak-minded and self-consumed Arnold is not a particularly sympathetic character. The running time seems overstretched given that so much of it consists of Arnold muttering to himself and doing mental arithmetic. And some of the lengthy discussions of metaphysics are as hard going as Arnold’s laborious slog through the Norwegian swamps.