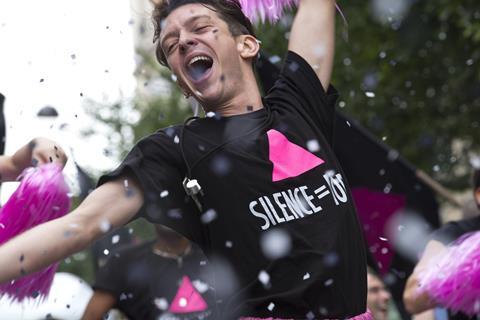 Robin Campillo’s third feature as a director confirms the old maxim that the more personal the material, the more authentic the drama. Revisiting elements of his own experience, Campillo has created a bustling fresco of the personalities and politics of the ACT UP Paris community during the 1990s. He uses that as a vivid backdrop to a tenderly crafted gay love story that unfolds during the fight against the prejudice surrounding AIDS. The attention to detail and heartfelt sincerity create a stirring commemoration of the period that should find a warm welcome from arthouse audiences, especially LGBTQ viewers.

Campillo risks alienating those unfamiliar with the time or the issues by immediately plunging into the nitty-gritty of an ACT UP Paris weekly meeting. Four new members are told the ground rules as we learn about a group dedicated to fighting the indifference of the Mitterand government and a pharmaceutical industry dragging its feet in releasing HIV drug treatments.

There is a documentary-style urgency to early scenes that feel like eavesdropping on an underground resistance engaged in a war. We witness the passionate debates, boiling sense of injustice and the need for action among those who know that time is short. Campillo avoids turning the drama into a lecture, keeping it lively, accessible and sharing fascinating little details from the way that finger-clicking was used as a way to signal approval at ACT UP meetings to the recipe for creating the fake blood that was thrown during demonstrations.

It is Sean who falls in love with gravely handsome newcomer Nathan (Arnaud Valois), one of the few members of the group with an HIV negative status. Their love deepens as Sean’s health fails. His passion for life and commitment to direct action are all the more poignant as he copes with endless medical procedures and the sense that he will soon die.

The love affair unfolds in intimate confidences and sensitively handled sex scenes and never becomes tearjerking. Biscayart and Valois are both understated in their performances, lending absolute conviction to the characters and their tragedy.

The screen time Campillo devotes to the activism of ACT UP allows us to view Sean as one more casualty among a generation of gay men, prostitutes, drug addicts and haemophiliacs who were failed by a world that seemed to have no interest in them. BPM (Beats Per Minute) is a moving, lump-in-the-throat love story but should also resonate on a political level as a testimony to the power of activism to awaken an indifferent world.