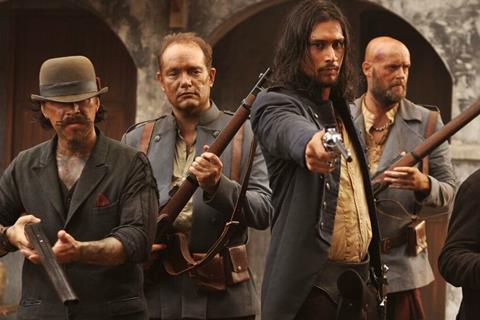 Two brothers seek vengeance for the slaying of their sultan father against the fraught backdrop of colonialised Indonesia in Mike Wiluan’s debut feature Buffalo Boys. Filtering local history through the universally recognisable genre iconography of the western, this handsomely mounted production has clearly been designed with foreign sales in mind. With its time-honored storyline and roughly half of its dialogue in English, Buffalo Boys is certainly readily accessible to those uninitiated in Indonesian cinema, but is saddled with a checklist of clichés that makes it fall short of being a rip-roaring success.

This is a film that often feels more assembled than directed, crucially lacking the sheer verve that would enable it to transcend the influences that it proudly wears on its dusty sleeve

After receiving its US premiere at the New York Asian Film Festival, Buffalo Boys should enjoy further exposure at Asian-themed events thanks to its apparent novelty value, but seems ultimately too traditional to breakout. Despite abundant action scenes peppered with CGI blood spurts, theatrical and streaming potential may be hindered by a relative lack of the subversive postmodern spin that helped previous ‘Asian westerns’ such as Sukiyaki Western Django (2007) and The Good, the Bad, the Weird (2008) become cult favorites.

Set in 1860, it begins in America where Arana (Tio Pakusadewo) has raised his nephews Jamar (Ario Bayu) and Suwo (Yoshi Sudarso) in exile after their father was murdered by a ruthless Dutch coloniser. Tired of working on the railroads, they return home to Jawa, Indonesia, and are welcomed into a community after rescuing Sri (Mikha Tambayong), the daughter of the village head, from bandits. They learn that the villagers are struggling to survive since being forced to grow opium instead of crops by the Dutch and anyone who shows signs of rebellion does so at the risk of the hangman’s noose.

When it transpires that the tyrannical oppressor, Captain Van Trach (Reinout Bussemaker), also killed their father, the brothers set out to take revenge and liberate the community from his wicked grip. However, Suwo’s need to prove that he is the equal to the older Jamar threatens to scupper their mission.

Stepping into the director’s chair following producing credits on Hitman: Agent 47 (2015) and Beyond Skyline (2017), Wiluan borrows from John Ford, Sergio Leone, and The Magnificent Seven (1960) in confident fashion. Aside from keeping things moving at a fair clip, he spices up anticipated action scenes such as a saloon brawl and the climactic main street showdown with well-choreographed martial arts moves and an array of distinctive weapons. Yet this is a film that often feels more assembled than directed, crucially lacking the sheer verve that would enable it to transcend the influences that it proudly wears on its dusty sleeve.

Although its vision is heavily romanticised, with John Radel’s cinematography largely favoring splendid vistas over gritty revisionism, the memorable moments in Buffalo Boys stem from how it dwells on the cruelty inflicted by the Dutch during occupation. In this respect, it can be viewed as a cousin of Quentin Tarantino’s Django Unchained (2012) with Bussemaker delivering the standout turn as the eminently despicable Van Trach for whom sadistic punishment has merely become an everyday chore. Van Trach has been seemingly written in one-dimensional fashion, but Bussemaker’s curiously detached delivery and glazed expression add a layer of weariness that makes his villain a compelling hate figure. The scenes in which he takes centre stage, particularly a hanging that merges heightened spaghetti western atmospherics with Grand Guignol theatrics, have a lurid quality that dissipates once the focus returns to the heroes.

Fitting the western archetypes of the strong, silent type (Jamar) and the breezy charmer (Suwo), they are celebrated as quick-witted ‘foreign’ saviors whose derring-do serves to inspire but also sideline those who bravely stand alongside them, notably feisty archer Kiona (Pevita Pearce). Wiluan stages some rough confrontations with a motley crew of henchmen played by Indonesian action cinema stalwarts that genre aficionados will recognise from The Raid (2011), The Raid 2 (2014), and Headshot (2016). Despite their gun-slinging skills and flair for fisticuffs, though, Jamar and Suwo are simply too pure hearted to make the eventual retribution deliver the full-blooded kick that was presumably intended.

The film also misses an opportunity to show how removed its heroes have become from their culture after coming-of-age in then United States. So instead of blazing a new frontier, Buffalo Boys romps through familiar ‘birth of a legend’ territory with moderately entertaining results.