A video camera found deep in the desert reveals the truth behind a series of mysterious deaths. 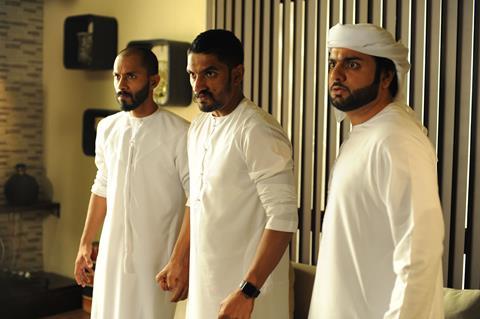 Violent Emirati genre films tend to be thin on the ground and while Abdullah Al Junaibi’s debut feature film Camera might feel familiar and rather slight at times (its modest running time is padded out by its credits) it is also punctuated by some nicely stylised moments of tension and violence and makes impressive use of its desert locations. Lushly produced, the film is a bold attempt to tap into a mainstream genre.

It is slickly produced and presented and while perhaps missing some genre opportunities (as well as any kind of female characters) it is at the very least attempting to deliver mainstream movie psychological thrills.

Abdullah Al Junaibi, who also stars in Camera, previously won a Best Director Award at DIFF for his 2012 short film The Path, and as an actor also appeared in Tobe Hooper’s 2013 UAE-shot horror film Djinn. In some ways feature debut feels at times like an extended short film (with obligatory twist at the end), but there is also a deal of ambition involved.

The film opens in the desert where a group of clearly well-to-do friends are out racing dune buggies. Just as they about to head off home, one of them comes across a GoPro camera buried in the sand…the contents of said camera are rather telegraphed when they read news stories on their phones about four young men being found in the desert dead in a burned out vehicle.

Bored with playing a soccer computer game at home, the three friends plug in the camera and are treated to brutal footage of a man being beaten and killed. The film’s story then switches to the ‘camera’ as it details four friends who load up a high tech jeep for a road trip into the desert. This section teases with going found-footage style (which perhaps it should have followed up with), but instead simply follows the foursome as they camp in the hills.

They witness – and also film – a man being tortured by a gang, with things getting even worse when the gang’s leader, who turns out to be a doctor, arrives and proceeds to cut out the man’s heart. The four friends get spotted and have to try and escape the bloodthirsty gang, who will stop at nothing to keep their secrets safe.

A final twist involving the three watching the footage is not unexpected, and while not breaking new cinematic ground the film does have a handful of impressive moments. It is slickly produced and presented and while perhaps missing some genre opportunities (as well as any kind of female characters) it is at the very least attempting to deliver mainstream movie psychological thrills.