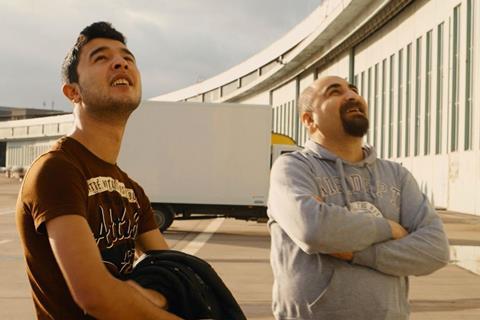 Countless documentaries have attempted to put a human face to the global refugee crisis but few have felt as compassionate or engaging as Karim Aïnouz’s Central Airport THF. The Futuro Beach director brings a warmly sympathetic eye to bear on the temporary refugee shelters in Berlin’s Tempelhof Airport and to the individuals there who are seeking to rebuild their lives. Festival interest should be brisk following the Berlinale world premiere.

Central Airport THF is distinguished by it determination to accentuate the positive and find the good in what is happening to the refugees.

So much of Germany’s recent history is reflected in the showpiece Tempelhof airport that began to operate in Berlin in the 1920s.Early in the film we follow a tour guide and tourists around the now abandoned buildings that are spotlessly maintained and eerily empty. The tour commentary is a clever means of providing a potted history of Tempelhof from Hitler’s rule through the Berlin Airlift and beyond.

When Tempelhof was closed down it became a public space and, since the autumn of 2015, several hangars have been used to provide supposedly temporary shelter for thousands of refugees. It has become a city within a city and Aïnouz’s discreet camera ventures beyond the dozens of little boxes that serve as homes to gather a sense of community from spaces set up for table tennis to the barbershop, the administering of vaccinations and even a modest Christmas market complete with trees, Santa and seasonal good cheer.

Central Airport THF follows this community over the best part of a year, finding its focus in the fate of 18 year-old Syrian refugee Ibrahim and aspiring doctor Qutaiba from Iraq. Both of the men are separated from loved ones, seeking a fresh start and adjusting to a new normality defined by uncertainty and the great unknown of what the future might hold.

Central Airport THF is distinguished by its determination to accentuate the positive and find the good in what is happening to the refugees. It is sensitive and feels the result of something built on trust and respect.

Ibrahim provides the narration for the documentary and becomes the dominant character as we watch him learn German and patiently wait to discover if he will be granted refugee status. His focus is on the future but there is also a wistful nostalgia for happier times in his close-knit village of farmers and tradesman in the far north of Syria.

Significantly, Aïnouz feels no need to document what is happening in the wider world or revisit the political arguments over the refugee population. His interest is strictly in the Tempelhof residents and Tempelhof is very much a major presence within the documentary. Cinematographer Juan Sarmiento G. provides a sense of its scale and majesty as he lingers over vast abandoned runways or picks out the urban foxes who prowl at night. It could be a location for Blade Runner 2049 and adds to the sense that the refugees have landed on another planet.

Ironically, the spaces around Tempelhof have now been reclaimed by the public for bike rides and picnics, bee keeping and jogging. There is a peaceful paradise on the doorstep of the refugees and an implicit message that Germany might be one of the few European countries generous enough to allow them to share it.