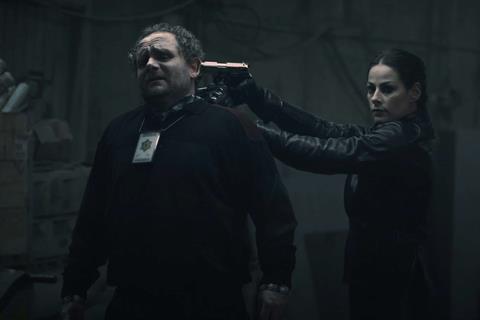 Raucously entertaining Icelandic spoof Cop Secret sees director/co-writer Hannes Thor Halldórsson make a smooth transition from professional sport to the world of feature films. Advance word on the picture focussed on the fact that Halldórsson has been the national football team’s first-choice goalkeeper for more than a decade. The film, however, proves of sufficient interest and crowdpleasing charm to stand on its own merits.

Somewhat generously granted a main-competition slot at Locarno for its world premiere, this fast-paced romp could smash box office records at home (local in-jokes ubiquitously abound) and set tills ringing across the rest of the Nordic/Scandinavian area. Further afield it can plausibly be positioned as a kind of Arctic cousin of Edgar Wright’s Hot Fuzz, while the jauntily-handled plot about two tough, feuding cops who are unwillingly forced to work together — then become “much more than just partners” — makes it a must for LGBT+ themed festivals and midnight-movie slots.

There’s a long-standing argument that no director should essay a parody without first having shown a capacity to execute the real thing with a straight face. Hannes can, however, point to the early career of Wright — who debuted back in 1995 with nano-budget, crowdfunded mock-western A Fistful Of Fingers. Cop Secret is a slickly-mounted affair by comparison, its numerous action set-pieces and Hollywood-style pyrotechnics carried off with confident technical élan and persuasive comic brio.

The basic running gag of Cop Secret (whose original title translates baldly as ’Detective’) is the absurdity of such high-octane shenanigans unfolding in and around the not-so-mean streets of Reykjavik — a scenic locale shot by cinematographer Elli Cassata to resemble a European or North American metropolis. There’s even an amusingly explosive and atmospheric  interlude in ‘Chinatown’, a hitherto-undiscovered section of the city. All this is the backdrop for the bromance-cum-romance between Reykjavik’s “toughest cop,” dysfunctional, hard-drinking, pizza-munching, scruffily hardboiled loner Bússi (Authunn Blöndal), and his equivalent in the adjoining, considerably more affluent jurisdiction Gardabaer.

As delightfully incarnated by Egill Einarsson (better known in certain quarters as DJ Muscleboy), Hörthur is the near-exact opposite of  Bússi — rich, urbane, educated, polyglot, sophisticated, smartly-attired, immaculately-coiffed — but no less effective when it comes to cracking crimes and slamming suspects behind bars. After initial macho frictions, opposites turn out to be highly attractive. This is no problem at all for the very 21st century Hörthur (who we’re told early on “defines himself as pansexual”) but something of a psychological hurdle for the decidedly more old-school Bússi.

The mismatched pair edge (then sprint) towards physical affection while being menaced and taunted by Rikki Ferrari (Björn Hlynur Björnsson), a former catwalk comrade of ex-model Hörthur turned deranged criminal mastermind. In one of the film’s typically daft but effective touches, Rikki — much given to intoning ludicrous aphorisms drawn from the animal kingdom — delivers nearly all his lines in a American-accented English which variously echoes Nicolas Cage, Michael Madsen, Clint Eastwood, Kurt Russell’s Snake Plissken and Alec Baldwin’s Donald Trump.

Rikki’s complex plan involves Iceland’s gold bullion stockpile, and revolves around an all-important football match between the Iceland and England women’s football teams. Hannes resists the temptation to overegg the soccer references, and makes the climactic developments on the pitch a key element of a finale which nimbly juggles three simultaneous locations via Guthni Halldórsson’s editing. From first to last Hannes affectionately pokes fun at the cop genre’s myriad well-worn tropes and clichés, complete with knowing and sharp dialogue from his co-scriptwriters Nína Petersen and Sverrir Thór Sverrisson — the latter also scoring on screen as Bússi’s dim-bulb, doughnut-munching first partner.