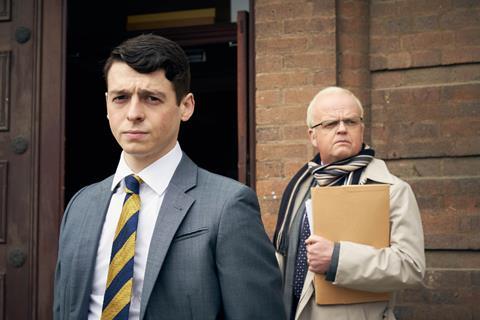 Superb performances from Anthony Boyle and Toby Jones are at the front-line of this solid feature-length BBC Two drama, which delves into the 2004 ‘Battle of Danny Boy’ — so named after a local British checkpoint — in southern Iraq and the subsequent public inquiry into suspected war crimes carried out by British soldiers against their Iraqi detainees. Writer Robert Jones and director Sam Miller capture the confusion of the battle and its tumultuous aftermath with immersive sound design and a non-linear narrative, bringing home the devastation of conflict as it explodes on the battlefield and then echoes through the supposed safety of home.

In 2004, the Iraq war was still in its relative infancy. Coalition forces had invaded the country the previous year, and the capture of Iraq’s president Saddam Hussein at the end of 2003 had sparked civil war. On May 14, 2004, 24 year-old Sergeant Brian Wood (played by 2016 Screen Star Of Tomorrow Boyle) found himself thrust into the midst of this bewildering cacophony of violence that he struggled to make sense of, both in the moment and for years afterwards. His actions on that day resulted in him first winning the Military Cross for bravery and, some years later, being at the heart of the public inquiry, accused of torture.

We hear the fighting before we see it; muffled gunshots and terrified shouting, the familiar soundtrack of war. These are sounds which will come to haunt Sgt Wood, who, on that fateful day, is ordered to lead his men out of the relative safety of their armoured vehicle and come to the aid of an ambushed British battalion. While it’s short-handed on screen, a closely-edited montage which slowly reveals itself through careful flashbacks, in reality the ensuing close-quarter fighting lasted for three hours and resulted in the death of 28 Mahdi Army soldiers. No British men lost their lives.

For soldiers like Sergeant Wood, though, the experience changed everything. At home with his exhausted wife Lucy (Leah McNamara) and a young baby he hardly knows, Wood attempts to hide his worsening psychological distress. Scarcely sleeping, and unable to give voice to the doubts that plague him, his fears about his own actions are exacerbated when it’s announced that there is to be an inquiry into his unit’s treatment of Iraqi detainees; men Wood believed were soldiers, but whose families are claiming were farmers.

As the deeply scarred Wood, Boyle carries the emotional weight of the character without ever becoming a mere cipher for the horrors of war. Jones’s screenplay stays close to the personal fallout of this experience, giving Boyle the space to dig into the seismic impact it had on Wood’s relationship with his family and his mental health. Most of the film plays out in his unassuming domestic setting, with flashbacks taking in the battle and snippets from a childhood with his own soldier father (Alex Ferns). What emerges is a fractured portrait of a man held hostage by forces beyond his control.

Toby Jones is also excellent as prosecuting human rights lawyer Phil Shiner who — as we see in a parallel story strand which also ducks and weaves chronologically — is also a man entirely consumed by his desire to do what he believes is right. As he becomes deeply involved in the case, and increasingly desperate to bring justice to those who cannot speak up for themselves, Shiner is an impressive moral crusader, yes, but also fallible and blind to evidence which doesn’t fit his own version of events. The film avoids picking a side, finding sympathy and flaws in both sides of the argument.

Indeed, nothing here is black and white. In fact, in one of several lines of dialogue that reverberates with dramatic licence, Shiner explicitly explains to one of his colleagues that soldiers tend to operate in the shades of grey that occur when the rules of engagement have come to an end. And while it may not come to any damning conclusions — ‘war is hell’ is certainly not a revelatory judgement — Danny Boy effectively sheds light into those shadowy areas of modern conflict.