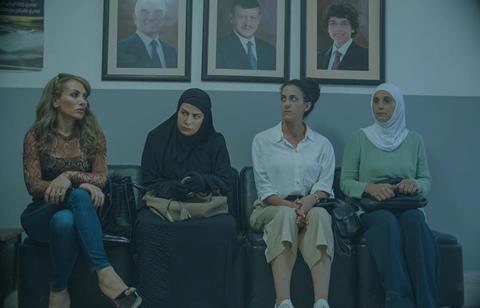 Sisters are doing it for themselves in the face of the Jordanian patriarchy and their own bickering in this feelgood if formulaic feature debut from Zaid Abu Hamdan. Stepping up from shorts and TV work, the writer-director shows plenty of ambition in terms of the feminist themes he wants to address in this comedy drama but like many first-time directors, his desire to cram in so much doesn’t leave a lot of room for nuance or characterisation.

World premiering in Cauro, where it won the Audience Award, Daughters of Abdul-Rahman went on to play the Red Sea Film Festival, which should cement interest for it in the MENA region, although its familiar, soapy trajectory and old-fashioned sexual politics may lead it to struggle further afield.

Abu Hamdan is helped by his strong ensemble cast – Saba Mubarak, Farah Bsaiso, Hanan Hillo and Mariam Basha – although each of the sisters draws heavily on stereotypes, right down to their shoes. Zainab (Bsaiso), with her sensible footwear and hijab, is every inch the stay-at-home spinster, looking after their difficult father (Khalid Tariffi) while picking up sewing jobs around the district. Love was something that happened to Zainab once a long time ago and now her dreams are represented by the squares of cloth from each dress she sews that she squirrels away in a drawer.

Mousey though she is, Zainab is an extrovert compared to her more conservative niqab-wearing older sibling Amaal (Mubarak), who was married off at an early age and has lived a life of anxiety ever since as she tries to shield her children from an abusive husband. At the opposite end of the spectrum is the vampish Samah (Hillo), with her perilous heels and spray-on jeans, who projects the air of a bored housewife but has marital problems of her own. Rounding out the set is Khitam (Basha), her trainers and yoga speaking to her life outside the country. She has come back to ask for her father’s blessing to get married after years of estrangement.

There’s a level of forgivable contrivance to be expected in a comedy like this, and so we see the women come together just as their father goes missing. After Abu Hamdan bundles his characters in Samah’s car, the close quarters allow him to bring comedy to the fore as they squabble their way around the district trying to find dad while keeping his disappearance a secret from the neighbours.

Hillo and Mubarak get the best of the script as opposing forces that gradually rediscover common ground and Bsaiso gives a palpable sense of the caged nature of Zainab’s life, trapped by her sense of duty and fears over her family’s reputation in a district of twitching curtains. Basha is a pleasant presence but her role is underwritten by comparison. The comedy starts to fade as the day wears on and melodrama begin to dominate as almost every conversation between the sisters quickly escalates to shrill and stays there. Masis Mardirossian’s score, which arrives with unnecessary gusto at moments of high emotion, only adds to the sense of laying things on too thick.

It seems nothing here – from a light that switches on automatically, to an old radio cassette player and those squares of cloth – is allowed to just casually exist, with Abu Hamdan insisting that each has its own story alongside his cast. This desire to tie up every loose end coupled with the constant emotional high voltage leads to an increasingly stagey vibe, as we wait for each of the sisters to have their inevitable moment of heartache, heart-to-heart and hugging. Multiple endings bring closure – even for the light – but also a growing sense of predictability.