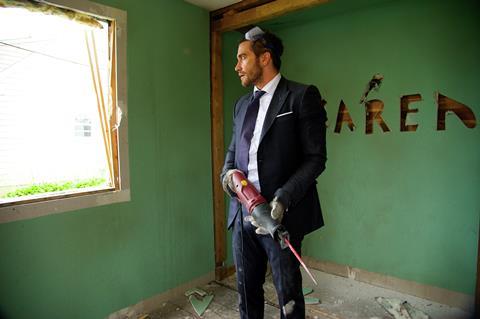 A husband grieves for his dead wife in unconventional — and unconvincing — ways in Demolition, a self-consciously quirky comedy-drama that badly overestimates how captivating its damaged, searching characters are. Jake Gyllenhaal creates some empathy as a man in spiritual free fall, but director Jean-Marc Vallée never grounds his protagonist’s peculiar mourning process in any sort of believable human behaviour, and so consequently the film grows more and more irksome, mistaking clanging emotional crescendos for some sort of grand truth about the need to go crazy every once in a while in order to stay sane.

Kicking off the Toronto Film Festival, Demolition is set for an April 2016 release in the States from Fox Searchlight, a release date which skips the potential of a serious awards campaign. Gyllenhaal’s marquee value, in addition to that of co-stars Naomi Watts and Chris Cooper, will certainly help commercially, and the film’s surface resemblance to another bold movie about emotional trauma, Silver Linings Playbook, could be a selling point. Nevertheless, tempered reviews could prove a major obstacle.

Gyllenhaal plays Davis, a high-powered New York investment banker who has just lost his wife to a car accident, one in which he was in the passenger seat but didn’t get a scratch. Oddly, though, he doesn’t feel that sad — if anything, he’s confused (and a little guilty) that he doesn’t feel much at all about her passing. Instead, he turns his attention to writing complaint letters to a vending machine company that cheated him out of candy in the hospital waiting room. Surprisingly, the buttoned-down Davis opens up in these letters, drawing the interest of Karen (Watts), the company’s customer service representative. Touched by his plight, she begins an intimate friendship with Davis, even though she has a boyfriend and a son (Judah Lewis).

Working from a screenplay by Bryan Sipe, Vallée (Wild, Dallas Buyers Club) intentionally leaves character motivations vague so as to emphasise the strangeness of Davis’s actions and, later, Karen’s inexplicit fascination with him. Just as Demolition isn’t exactly a love story — the main characters never even kiss — the film eschews easy categorisation, content to follow Davis along as he sets aside his Wall Street lifestyle and instead becomes obsessed with taking things apart like grandfather clocks and bathroom stalls, eventually working his way up to volunteering for house demolition crews.

Unsubtly, Demolition argues that Davis is processing his sadness by metaphorically demolishing the world he once knew, fixating on how objects and even buildings fall apart. That logic works intellectually, but Vallée drapes the insight in layers of cutesy excess, playing the man’s slow-motion breakdown for would-be dark laughs and ironic triumph. Though it’s laudable that Vallée and his cast tried not to make just another story about someone wallowing in his grief, their alternative coddles Davis’s mourning with a rampant colourfulness that’s suffocating.

Gyllenhaal occasionally sells the mental collapse that’s going on inside Davis — the character is just outwardly normal enough that his quietly disturbing actions can sometimes shock — but because there’s never a reasonable explanation given for why Davis and Karen bond, Watts is left to flounder. Not unhinged like Davis, Karen simply seems dim-witted, unable to recognize the clear storm clouds encircling this man. The Oscar-winning Cooper is wasted as Davis’s boss and the father of the deceased. As for newcomer Lewis, he shows a little attitude as Karen’s punk son, but the character’s growing realisation about his sexuality is merely a plot device meant to add dramatic stakes to a movie already overdosing on preciousness.