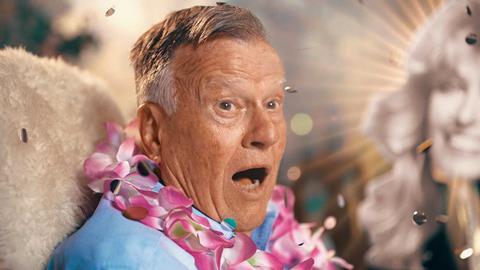 A daughter memorialises her father while he’s still alive in Kirsten Johnson’s powerfully moving Dick Johnson Is Dead. Filming her octogenarian dad as Alzheimer’s takes hold, the director and cinematographer offers an intimate portrait of both their loving relationship and their growing acknowledgement that — either because of his mental decline or actual death — they will soon be separated. This documentary sports fantastical digressions in which Johnson crafts fictional scenarios of how her father could die — starring Dick himself — but the movie’s light-hearted tone merely holds at bay the tears that will be shed by the filmmaker and viewers.

Johnson’s deeply compassionate, even hopeful tone could be a balm for her fellow grievers

Screening as part of CPH:DOX, this Netflix film premiered at Sundance, where it received a special jury prize for Innovation in Nonfiction Storytelling, and indeed Dick Johnson Is Dead’s clever, life-affirming approach to inherently gloomy subject material should help it find an audience. For those who have watched loved ones fight a losing battle with Alzheimer’s, the movie might seem unappealing, but Johnson’s deeply compassionate, even hopeful tone could be a balm for her fellow grievers.

Early on through voiceover, Johnson explains how close she is to her father C. Richard ’Dick’ Johnson, a Seattle psychiatrist who has been struggling in recent times with Alzheimer’s. Making the difficult decision to move Dick from their family home so that he can live with Johnson and her young children in New York, she films his mental deterioration while also staging scripted sequences in which her dad dies through random accidents — or is in Heaven enjoying the afterlife.

A long-time documentary cinematographer who in 2016’s Cameraperson reflected on the footage she’s shot over the years, Johnson reminiscences in another way in her new film, grappling with the loss of someone she describes as her best friend. We don’t doubt her claim: Dick Johnson Is Dead features multiple warm interactions between the director and her father, and their charming, easy-going rapport is one of the documentary’s core strengths. But as pleasurable as it is to watch their exchanges — with Johnson usually behind the camera — there’s an undeniable poignancy attached since we (and they) know that Dick will only deteriorate.

Maybe that’s why Johnson is so intent on filming Dick, wanting as much footage as possible. (As we’ll learn, her dedication to this task is, in part, a way to assuage her guilt for not filming much of her mother, who also suffered from Alzheimer’s and died about a decade ago.) In her voiceover, Johnson tries to bear witness to the man he was — a sweet, gentle father and husband who always believed in living in the moment. Subdued but noticeable emotion comes across in this narration, and her restraint only makes the obvious sadness that much more crushing.

Perhaps as a way to add some barbed levity to the proceedings, Dick Johnson Is Dead occasionally segues into these surreal scenarios in which Dick (with the help of stunt doubles) acts out his own death. He’s crushed by a falling air conditioner, tumbles down a flight of stairs, and is struck by a careless construction worker. Other fictional scenarios are manufactured — including brief visits to Heaven — and while they help ensure that Dick Johnson Is Dead isn’t too sombre, the playacting can sometimes feel cutesy or redundant. With that said, for Johnson (and maybe her father) these digressions are clearly therapeutic — a way to talk around the insurmountable sorrow in which they find themselves.

The film is a quiet marvel of astute, intuitive editing courtesy of acclaimed documentary editor Nels Bangerter (who is credited as a co-writer alongside Johnson). While Dick Johnson Is Dead unspools in a generally chronological manner, Johnson deftly moves between past, present and fantasy, turning what might seem like a stream-of-consciousness piece into a focused treatise on family, love and the pain of saying goodbye. Along the way, the documentary also subtly explores the limits of nonfiction to tell this story — how chronicling a person with a camera is, in its own way, an imperfect form of memory. It’s a valid point, but as Dick Johnson Is Dead argues persuasively, imperfect forms are all we have when we’re trying to hold onto those who mean so much to us.