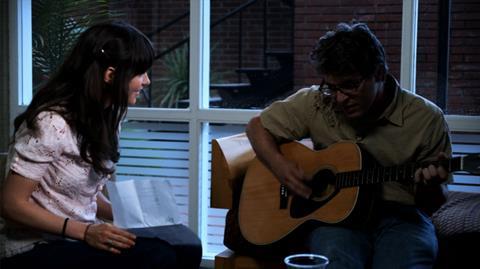 For those willing to accompany obsessed Boston Globe journalist Geoff Edgers through his dubious quest to reunite the original members of  1960s Brit band phenomenon The Kinks, Do It Again is de rigeur—but not for too many others.

While Edgers is passionate and knowledgeable about his subject, this 39-year-old husband and father, who is going through a midlife crisis and is “stuck in high school,” can come across as unbearable. A native of upper-middle-class Brookline, Massachusetts, his tracking down other Kinks members and peers begins to feel like an invasive, somewhat condescending dip into the waters of Plebia.

Edgers manages to land interviews with such Kinks admirers as Sting and actress Zooey Deschanel, former managers, and lots of ex-bandmates. He succeeds in his request to jam with some of the musicians while he talks to them, but the unusual query, while occasionally effective at breaking the ice, points to the chief problem with this film: Edgers is very much at the center, and, despite inserts of his troubles at the Globe and financial arguments with his wife, he is just not that interesting.

Do It Again’s background songs (Lola, You Really Got Me, Do It Again) are, however, a special treat. But, as the documentary points out, a younger generation of Americans, in particular, do not even know who the Kinks were.

The key to the project is Ray Davies, the creative force behind the Kinks, a man with a legendarily short fuse and an abusive relationship with fellow band member and younger brother Dave. Since Ray will not participate, Do It Again becomes somewhat pointless, and its slight payoff – in which Edgers learns that barbecuing with his family and pals is more satisfying than following his dream - is weak.