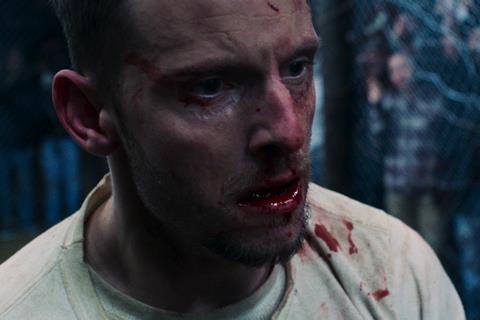 A raw drama about desperate individuals fighting to keep their heads above water, Donnybrook examines the underbelly of the American Rust Belt, expressing a tempered respect for those surviving on the margins. Filmmaker Tim Sutton elicits pitiless performances from Frank Grillo and Jamie Bell playing two very different criminals on a collision course, and the film exudes a grungy, B-movie ethos in keeping with its scrappy, resourceful characters.

Donnybrook is chiefly a snapshot of a community with few opportunities

Donnybrook premieres in Toronto, courting buyers who no doubt admire Sutton’s previous work, Memphis and Dark Night. His latest is a slightly more commercial proposition thanks to its stars and passing similarities to other blue-collar indie thrillers such as Blue Ruin. Still, strong reviews would help buoy box-office interest.

Set in an economically depressed Ohio small town, the film stars Bell as Jarhead Earl, a military veteran trying to raise two kids while helping his ailing wife who’s addicted to pain medication. Drugs are a scourge across Donnybrook’s battered rural landscape, which is ruled by ruthless dealer Chainsaw Angus (Grillo) and his much younger sister Delia (Margaret Qualley), who have no problem resorting to violence to maintain their empire.

Working from Frank Bill’s novel, Sutton presents Earl with one beacon of hope amidst all the desolation around him: a no-holds-barred underground boxing competition known as the Donnybrook that will net the winner $100,000 — the kind of payday that could change his family’s life. But the steps Earl takes — some of them illegal — to get to the Donnybrook prove to be far more important dramatically than the big finale, although what awaits him in the ring turns out to be powerfully affecting as well.

Although drawing on elements of the boxing movie and crime thriller, Donnybrook is chiefly a snapshot of a community with few opportunities. Drug deals, petty theft and murder are commonplace, and Sutton adopts a dispassionate perspective regarding the lawlessness his camera observes — we quickly come to understand that, in a world without dependable jobs, residents have learned to get creative if they want to put food on the table. Distressed trailer parks, eyesore bars and beat-up vehicles litter the terrain, and Sutton highlights how men like Earl and Angus have distinguished themselves as survivors, unconcerned how outsiders would judge their actions.

Grillo projects silent menace, delivering the same sort of imposing physical performance that he gave in The Purge: Anarchy and The Grey. In comparison to Angus’ coiled evil, Bell is more nuanced portraying a father and husband who has done bad things for what he considers honourable reasons. (Where Angus sadistically tortures and slays those who defy him, Earl is merely a stickup artist.) Going on the road with his son to reach the Donnybrook, Earl represents a more complicated version of manhood, alternating between tenderness and aggression, all the while hoping he can give his children a better life than the one he’s known.

Phil Mossman’s mournful orchestral score gives the proceedings a doomed grandeur, although much of Donnybrook is as direct and visceral as a punch to the jaw. Even if Sutton occasionally overdoes the toxic masculinity and red-state seediness, the movie becomes increasingly gripping as it draws us into this brutal reality.

Sutton’s tonal control is further in evidence with a terrific supporting cast led by James Badge Dale as a pathetic, drugged-up cop whose reasons for going after Angus seem personal as much as professional. And Qualley astonishes, playing Angus’ kid sister who might be even more demented than he is. Look under any rock in Donnybrook and you’ll find something slithering — Sutton and his cast ensure you’re engrossed by every single one of them.

Screenplay: Tim Sutton, based on the book by Frank Bill