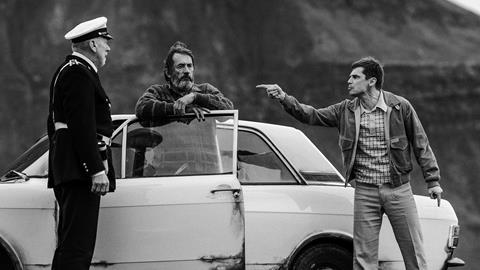 Hilmar Oddsson’s first feature film since December (2009) is an enjoyably dark and dour comedy road movie and a belated coming of age for a man whose mother has systematically squashed all opportunities for joy in his life. Driving Mum, which won the Grand Prix in the Official Selection Competition in Tallinn, takes a familiar storyline – previous corpse transportation road movies include The Three Burials of Melquiades Estrada, Swiss Army Man and Weekend At Bernie’s – and dresses it in Icelandic knitwear.

As for Mama, the fact that she is dead doesn’t stop her from always getting the last word

The comedy here, drawn from the son’s abrasive character and from his late mama’s acerbic commentary from beyond the grave, is sandpaper dry; the black and white cinematography captures the majestic indifference of Iceland’s sparsely populated northwestern reaches. Driving Mum is distinctive enough in approach to intrigue arthouse audiences, both at further festivals and possibly through a carefully marketed theatrical release.

Already at the cantankerous and disappointed end of middle age, Jon (Prostur Leo Gunnarsson) lives with his elderly and overbearing mother (Kristbjorg Kjeld) at the furthest, most isolated fringe of Iceland. Their main connection with the rest of the world is a small boat that putters across the fjord every couple of weeks. It’s a penance of a life, which Mama regards as her punishment for previous bad decisions, and which Jon adopted because his mother decreed it. When Mama dies, dictatorial to the end, she leaves a set of instructions. Jon must drive her across the country to bury her in Eyrarbakki, the village of her birth. With his dead mother propped up in the back of his car, and the family dog, Bresnef, shooting worried, sidelong glances from the front passenger seat, Jon sets off on a journey that will teach him about himself, his lost love and his relationship with his mother.

Jon and his mother’s life in their isolated farmstead is stripped back to basics. They knit traditional sweaters for a living – a pointed shot of strands of wool from their respective balls hopelessly entwined is a neat visual metaphor for their co-existence. For entertainment, they listen to cassette tape recordings of radio broadcasts, delivered by boat along with their essential supplies; Mama sucks her teeth in disapproval at anything too risqué. Jon takes photographs as a hobby, predominantly of landscapes empty of human life. As his journey progresses, his lens starts to be drawn to other people, triggering memories of his younger, less antisocial self.

Having spent so much of his life in the company of just his mother, Jon is not attuned to the basic rules of human interaction. Intractable and immovable as the volcanic boulders which punctuate the landscape, he is gloriously rude to fellow drivers and to the hitchhiker (Tomas Lemarquis) he encounters in the middle of nowhere. A second chance meeting with the man reveals just how far Jon has come, both geographically and personally.

The disreputable and discordant score, which sounds as though it was played on thrift store instruments by musicians several days into a schnapps binge, is as angular and unwieldy as Jon’s personality. But as the film progresses, he is haunted, in a bold and surreal device, by an imaginary Greek chorus of theatrical players, featuring the lost love of his life, Bergdis. And Jon starts to soften, opening up to the world around him and finally standing up to his mum. And as for Mama, the fact that she is dead doesn’t stop her from always getting the last word.