An eco-fable for our times from Argentina’s Ivan Fund 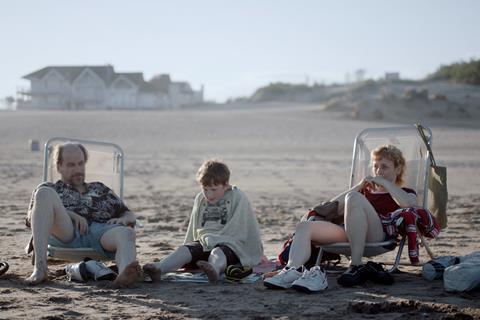 Faith brings its own reward in Dusk Stone (Piedra Noche). Director Ivan Fund lends an understated sincerity to a simple story in which two grief-stricken parents look for signs of hope to lighten the burden of their loss. Audiences might find it harder to see the light, though, in an initially intriguing but very slight tale.

Fund won the WIP LATAM Industry Award at San Sebastian in 2020 (and Dusk Stone plays there this year in Horizontes Latinos after a Venice Days premiere) but his film remains a project that is difficult to position. There are elements that vaguely hark back to Hollywood family favourites of the 1980s (Harry And The Hendersons, batteries not included, etc) blended with an attempt to create a comforting, soulful eco-fable for our times.

Fund begins with scenes of happy family life as Greta (Mara Bestelli) and Bruno (Marcelo Subiotto) spend time at the beachhouse with their son Denis (Jeremias Mateo Kuharo). Lingering close-ups testify to a fondness and a tight-knit bond between the trio as the boy plays with a games consul that allows him to create a kaiju or giant monster on screen that is inspired by a mosquito.

The location itself has an apocalyptic feel. The family seem to have the long stretch of beach to themselves and the look of the film is grey, bleached and bleak. News reports and conversation talk of climate change and global disasters. Everything seems to have changed since the construction of a platform in the bay that has been followed by an invasion of harriers and rumoured sightings of sharks.

One dark night, the curious boy heads to the beach and the next morning is nowhere to be found. A year later, Greta’s childhood friend Sina (Alvarez) arrives to help the couple pack up in preparation for leaving the beach house. There is talk now of a crisis that resulted in property being looted and burnt, tides that have closed roads and a strange new sea creature in the bay. In any conversations, Greta seems anxious and almost furtive whilst a distracted Bruno stares wistfully across the sand and out to sea.

It is fairly obvious where Dusk Stone may be heading but the central premise creates a certain naive appeal. Fund wisely refrains from showing the monster until late in the day but builds its presence through discussion and speculation. He still never quite makes the Twilight Zone-like tale entirely persuasive, though.  Some elements feel underdeveloped - what exactly has happened in the past year, what is the mysterious crisis that has caused such (unseen) disruption? The actions of some characters don’t entirely make sense. Local entrepreneur Genaro, played in steely fashion by Alfredo Castro, welcomes the arrival of a Loch Ness-style sea monster that could be a tourist-magnet and yet instinctively reaches for a rifle and starts shooting at the first unfamiliar object he spies in the water.

Francisco Cerda’s heavy-handed, often melodramatic score seems intent on creating moods and expectations that place it in conflict with the quiet, mournful narrative. It adds to the impression of a well-intentioned film that just doesn’t quite add up to a satisfying whole.