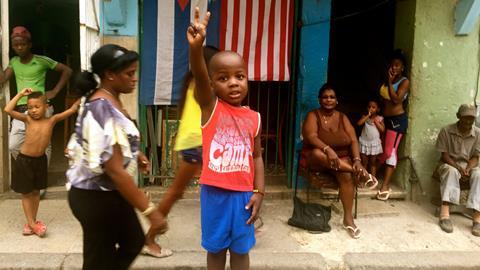 Politics, people and the power of cinema are brought together to create a mosaic-like reflection on Cuba’s history in Epicentro. Deceptively casual in its construction, the latest work from Darwin’s Nightmare director Hubert Sauper can feel like it is drifting aimlessly as it soaks up the fading grandeur of Havana. There are moments of bell-like clarity along the way that build into a touching lament for a people constantly at the mercy of other nations’ grand designs. Winner of the Grand Jury Award in the Sundance World Documentary Competition, Epicentro will find a ready welcome at global festivals.

Sauper begins his “voyage through time and space” in 1898 with the sinking of the American battleship USS Maine and an official version of history in which a noble America is portrayed as heroically liberating the island from the yoke of Spanish rule.

The legacy of colonialism is one of the themes that binds the film together. The army of modern tourists intent on grabbing their share of Cuba’s heritage is seen as just the latest wave of foreign invasion.

Sauper captures a Cuba that seems frozen in time, shaped by its past and awaiting transition with trepidation. Schoolchildren watch enraptured by films from the dawn of cinema, delighted by the work of the Lumiere brothers and Georges Melies and transfixed by images of the USS Maine explosion and the execution of Cubans by their Spanish rulers. It is only by deconstructing the images and digging deeper that it becomes apparent that they can only have been staged. Film can capture a record of the past but can also distort it. Fake news is hardly a 21st century phenomenon as the children recognise that cinema is also propaganda.

Cuba has been shaped by the slave trade, colonisation and the whims of global powers which makes it all the more poignant when Sauper explores the beauty of the country and the notion that it is a kind of utopia or paradise. There is a vivid sense of Havana in images of the crumbling buildings, crashing waves at the sea shore, a disused sugar factory, charming trobadours singing ’Guantanamera’, walls sporting posters of Che Guevara and Fidel Castro and the flashy Chevrolets and Pontiacs of yesteryear that prowl the highways.

Densely packed with sometimes random reflections, Epicentro shines in Hauper’s many encounters with the people of Cuba. Among those he meets is Charlie Chaplin’s granddaughter Oona Castilla Chaplin, who sings on the soundtrack. There is a particular fondness in the bond he forges with children he dubs “little prophets”. Filmed in the murky shadows of nightfall, his conversations with the likes of Leonelis and Annielys reveal children that are articulate, politically engaged and full of life. He becomes a conspirator in their adventures, encouraging Annielys in her acting ambitions and helping them sneak into a swimming pool in a luxury hotel built for foreigners.

It is the resilience of individuals that seems to reflect a melancholy Cuba acutely aware of its past but curious about its future. There are times when Epicentro seems to lack focus but no matter where it roams, it always returns to its central concerns of colonisation, mythmaking and the way the true spirit of Cuba resides in its people.