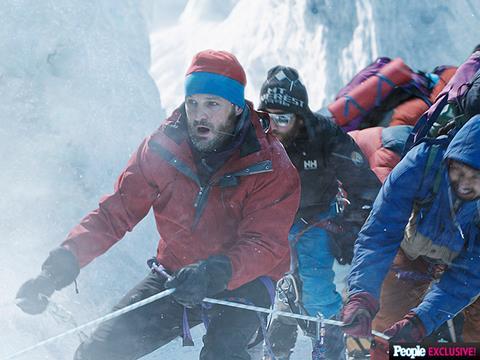 “Because it’s there,” legendary mountain climber George Mallory supposedly responded when asked to explain why he wanted to reach the top of Mount Everest, in a few words encapsulating the confidence, stubbornness and adventurous spirit required of those willing to risk their lives for this extreme sport. The crucial problem with Everest, director Baltasar Kormákur’s take on a disastrous 1996 climb up the same mountain, is that it pales in comparison when trying to capture the mindset of its hearty characters, resulting in a survival film higher in spectacle than human connection. While it’s impossible not to be somewhat caught up in these climbers’ life-or-death struggle, Everest is oddly uninvolving — it depicts a horrific scenario in an underwhelming, distancing way.

Kormákur sets Everest up in the typical disaster-movie mode, establishing the characters in simplistic terms so that we learn, at most, maybe two things about any one person

World premiering as the opening film at Venice, Everest will be in theaters across most of the globe by the end of September. This Universal offering boasts some star power thanks to a cast that features Jason Clarke, Josh Brolin, Keira Knightley, Sam Worthington and Jake Gyllenhaal, but the film’s biggest selling point might be its disaster-movie hook, which proved potent for other fact-based dramas like The Perfect Storm. Grosses aren’t guaranteed to be sky-high, however, requiring strong reviews and good word-of-mouth to give viewers incentive to embark on this journey.

As the film begins in the spring of 1996, a collection of different climbers, mostly men, assemble to begin the expedition to the top of Everest, including a good-old-boy Texan named Beck (Brolin), the travel writer Jon Krakauer (Michael Kelly) and patient, experienced guide Rob Hall (Clarke). Working as a team with cautious persistence, most of the climbers reach the summit, but a deadly storm and an unexpected shortage of oxygen tanks turn their trip back down to basecamp into a perilous quest to stay alive.

Working from a screenplay credited to William Nicholson and Simon Beaufoy, Kormákur (2 Guns, Contraband) sets Everest up in the typical disaster-movie mode, establishing the characters in simplistic terms so that we learn, at most, maybe two things about any one person. (A convenient device is a reference to the worried wife that the climber left at home.) But when Kormákur has the characters lay out the reasons why they’re obsessed with such a dangerous sport, the explanations tend to be perfunctory rather than enlightening. This proves problematic later when the film asks us to be sympathetic to their plight once their passion leads some of them to an early grave.

Although the film is based on actual events, Kormákur and his impressive cast fail to make these individuals really resonate. (John Hawkes is largely wasted as a soft-spoken climber who failed to summit the previous year, while Gyllenhaal can’t do much with a one-note hotshot.) Consequently, one can’t shake the impression that they’re mostly props on Kormákur’s large mountain canvas. There’s no question Everest can be harrowing, but rather than gripping, the movie is simply unpleasant, the hardships of characters we don’t know are laboured over in the hopes that they’ll attain a poetic, tragic grandeur.

But the movie is only inconsistently successful in that regard — just as it is in its attempt to convey the terror and beauty of climbing the world’s highest mountain. Shooting everywhere from the Italian Alps to Pinewood Studios, Kormákur rarely evokes the vertigo-like queasiness that mountain-climbing documentaries (such as the upcoming Sherpa) elicit, inevitably lowering the sense of palpable danger hovering around our characters. For a movie about battling the cruel realities of nature, Everest feels surprisingly artificial, a technical exercise in producing dread that’s shockingly short on feeling.