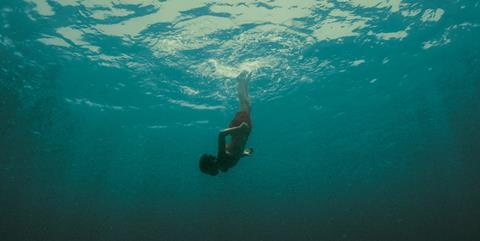 If you think about it, the way humans reproduce is kind of odd. Lucile Hadžihalilovic presents a captivating alternative in Evolution, a sustained visual tour-de-force that’s the opposite of a popcorn movie. In fact, theme-appropriate snacks might run more to grey worm gruel with an amniotic fluid chaser. Self-selecting audiences will swoon; the unsuspecting viewer may cringe but still be won over. Hadžihalilovic (Innocence) creates a deliberate, painterly mood that’s not soon forgotten.

The only thing that’s clear from start to finish is that Hadžihalilovic is in absolute command of her unsettling cinematic realm.

While swimming underwater, ten-year-old Nicolas (Max Brebant, the  adorable essence of boyishness) glimpses what appears to be a dead boy with a red starfish on his belly.  Nicolas quickly picks his way across the striking dark rocks of his town’s shoreline to report his discovery to his mother (Julie-Marie Parmentier). Mum assures him he saw no such thing. It’s time for unappetising supper, a strange dose of medication and to bed.  Because growing — or not-growing — boys need their rest to, uh, well, play their part in a sort of artisanal assembly line of strange goings-on.

There’s not much dialogue but it gradually becomes clear that the town’s cute young boys say things that are true while their mothers and the locale’s all-female medical personnel have a tendency to lie.

The narrative shows particular skill in doling out just enough “did I just see that?” imagery to make the director’s alternative universe as consistently compelling as it is creepy. By the way, there are no grown men to be seen.

This is a dark film that’s truly dark in every aspect. The pale women may be only a few notches away from albino but a great deal of the story transpires at night in inky black surroundings where what we need to see is skillfully lit. Good sound design and an unsettling score add to the pleasurable queasiness.

We, as viewers, know that something is terribly off-kilter but despite the precision at work in every frame, it’s not easy to work out what, exactly, is going on in this waking nightmare.

Some will find that frustrating. Others will relish the ambient weirdness.  Large octopus-style suction cups on human bodies? Check. Naked women writhing in ecstasy in a Busby Berkeley meets Hieronymus Bosch tableau? Check. Underwater foliage swaying voluptuously with the current? Check. Unsettling medical procedures in ridiculously spare facilities? That, too.

One of the pale women who tends to the boys (Roxane Duran) seems to have taken a liking to Nicolas and may or may not be challenging the status quo. The only thing that’s clear from start to finish is that Hadžihalilovic is in absolute command of her unsettling cinematic realm.