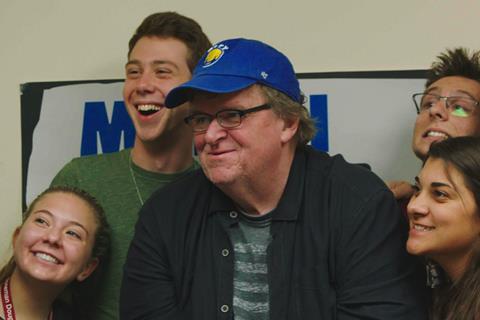 America is beset with problems — and Michael Moore is determined to tackle them all at once. His latest, Fahrenheit 11/9, is a roving overview of the country’s ills — confronting everything from gun violence to racism to the presidential election of Donald Trump — and its anguished, scattershot technique may comfort those who feel similarly that the United States has lost its way. But as is often the case with Moore’s impassioned documentaries, 11/9 frustrates as much as it rouses, bouncing from topic to topic without fully digging into any of them. As such, it’s a highlight reel of grievances against government, corporations and the status quo that preaches to the choir.

Although Moore doesn’t say so explicitly in 11/9, the film’s September 21 US release is clearly meant to encourage progressive Americans to vote in the country’s November midterm election. The title consciously evokes Moore’s 2004 documentary Fahrenheit 9/11, easily his most commercially successful offering ($222 million worldwide), although it seems unlikely that 11/9 will be as much of a runaway sensation.

11/9 frustrates as much as it rouses, bouncing from topic to topic without fully digging into any of them

11/9 refers to November 9, the day in 2016 when the presidential election was officially called for Trump, who had been perceived as a massive underdog against Hillary Clinton. Moore’s film purports to get to the bottom of how Trump could have proved all the prognosticators wrong, first looking at how that election campaign unfolded but then seguing into tangential issues that are also plaguing the nation.

This is pretty standard operating procedure for Moore, who often uses an incendiary topic — the Columbine school shootings in Bowling For Columbine, George W. Bush’s invasion of Iraq for Fahrenheit 9/11 — as a launching pad for humorous or sobering digressions about America’s various hypocrisies. An unabashed left-leaning filmmaker, Moore has long attacked conservatives, and 11/9 is no different, not just vilifying Trump’s misogyny and racism but also taking aim at a Republican establishment that tries to repress individual rights to appease its wealthy big-business donors.

But Moore’s outrage extends to both political parties, going into some detail about how Democratic leaders stifled Bernie Sanders’ bid for the nomination in favour of Clinton. (11/9 is also critical of former presidents Barack Obama and Bill Clinton for their failures in office.) Unfortunately, none of Moore’s observations are particularly trenchant — if anything, the movie feels like it’s relitigating Democratic slip-ups that, by this point, have already been exhaustively dissected and debated.

11/9 grows more confident when traveling to Flint, Michigan, Moore’s hometown and the site of his most searching film, 1989’s Roger & Me. But where that documentary explored the crumbling auto industry and its devastating effect on the local community, 11/9 spotlights the city’s recent water crisis, which began in 2014 and remains catastrophic, leaving families without safe drinking water. For those unaware of the civic disaster, 11/9 will be shocking, but even for those familiar with the story, Moore’s clear empathy for the victims is far more specific and personal than 11/9’s otherwise more general indignations.

Anyone politically aligned with Moore (or morally opposed to Trump and his administration) will find much in this two-hour-plus documentary to be enraged about. But 11/9’s roaming anger and stray attempts at comedy — including Moore’s old trick of futilely marching into a public building to try to confront one of his high-profile targets — too often play like well-worn shtick, the celebrity director catering to an enraged, loyal fan base. His movie may indeed motivate citizens to the polls, but as a piece of compelling analysis or activist art, 11/9 is far from a decisive victory.