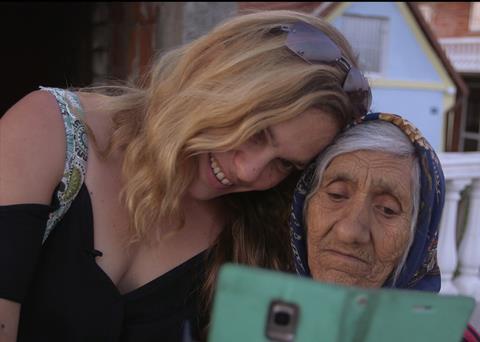 Two cultures try to live in harmony in Faith And Branko, a documentary portrait of the personal and professional relationship of Faith Elliott and Branko Ristic, married couple who are also part of a musical combo. Making her feature debut, director Catherine Harte spent seven years with this English accordionist and Roma violinist, observing as their relationship turns into a career, but not without some hardships along the way. Although somewhat slight, this patient film is strengthened by its charismatic central figures, whose openness in front of the camera adds drama to their romantic ups and downs.

There’s an intimacy to Faith And Branko that extends to the way the two subjects (and those around them) speak directly to Harte, as if she’s part of this extended family.

Faith And Branko makes its world premiere at Sheffield Doc/Fest, and those familiar with this duo will be interested in eavesdropping on their offstage lives. But even general audiences could respond to the documentary’s fish-out-of-water narrative, as Branko makes the difficult transition from his small, rural Serbian town to Faith’s far more cosmopolitan British life.

Early in the film, we learn that Faith had travelled to Serbia in the hopes of recruiting gypsy musicians for a band she’s putting together for a circus back home. She has become smitten with the shy, sweet Branko, who doesn’t speak much English but is also drawn to her. Somewhat on a whim, they marry, with Branko heading to England with Faith and experiencing life as a working musician.

Harte gives us reason to be concerned about the long-term viability of this couple, who perform under the moniker Faith i Branko. Although they literally make beautiful music together, his impoverished, traditional upbringing and her cultured, privileged background threaten to erect permanent barriers between them. (Branko’s grandmother doesn’t understand why Faith doesn’t know how to cook and clean, the “duties” of a wife. Meanwhile, Faith is taken aback when Branko is flummoxed by an escalator, which he has never seen before.)

At first, those culture clashes seem amusing but harmless, but as Faith And Branko rolls along, it becomes clear that Branko is having a hard time adjusting to England, battling severe homesickness. (In addition, he’s diabetic, unable to function if his blood sugar drops.) The film pops in on crucial moments over those seven years, and sometimes it’s jarring to see how much this couple has changed. Most notably, Branko comes out of his shell as their band develops an international following on the road. But the transformations aren’t always so pleasing. Late in the film, an infidelity rocks their marriage, causing both spouses to acknowledge problems that were there from the start — and must now finally be addressed if they’re going to move forward.

There’s an intimacy to Faith And Branko that extends to the way the two subjects (and those around them) speak directly to Harte, as if she’s part of this extended family. That trust yields some impressively vulnerable footage, particularly near the end as we watch Faith and Branko negotiate this rocky period. Harte’s camera captures painful FaceTime conversations and teary confessionals, but because she’s been so close to them from nearly the beginning of their relationship, it doesn’t feel intrusive. Rather, Harte has been an integral part of their lives — and she’ll become a person that they’ll turn to when things look bleak.

It also helps that Faith and Branko are engaging individuals. She’s funny and vibrant, while he’s kind and puppy-dog enthusiastic. Whether they’re performing together or hanging out at home, the couple have a palpable bond that, despite their contrasting backgrounds, seems destined to last. But that sentiment is challenged by what transpires in Faith And Branko, and the movie is fairly equitable in its depiction of both spouses. Those who follow Faith i Branko will perhaps know the movie’s outcome, but the muted finale speaks to the importance of staying in tune with your partner — whether in a romance or in a band.

Production companies: This And That, Cathartic Films