‘Film About A Father Who’: Sheffield Doc/Fest Review

A chapter in a continuing stream of work by an experimental, highly personal film-maker 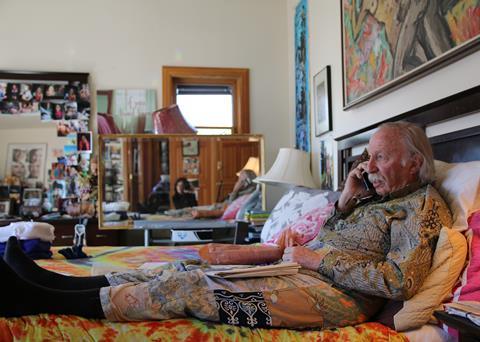 Lynne Sachs’s Film About a Father Who begins and ends with images of the director cutting her elderly father’s tangled hair. This inescapably suggests an attempt to get into the man’s head, but that is precisely what Sachs’s film does not do. Described by the film-maker towards the end as neither a portrait nor a self-portrait, this documentary essay explores the complexities of a disparate family and a nexus of problems revolving around a wayward, unconventional, elusive patriarch.

Through its depiction of Ira, the film indirectly sketches a picture of a generation of American males whose lives were changed by the radical ideals of the 60s but who remained no less patriarchal for all that

First screened at Slamdance, the film receives its international premiere at Sheffield Doc/Fest alongside a selection of shorts by Sachs, which should give context to a documentary that is formidable in its candour and ambition, but which many viewers may find frustratingly elusive in its eschewal of a more conventional expository style.

Named after Yvonne Rainer’s 1974 work Film About a Woman Who…, and inspired by the narrative approach of Heinrich Böll’s novel Group Portrait With A Lady, Sachs’s film gradually unpacks the mysteries of her large family, and the relationship between the nine children and their their father. Now in his 80s, and seen on film and video over several decades, Ira Sachs Sr. is a Park City businessman, sometime hotelier and hippie bon vivant, a lover of the great outdoors who has clearly led the freewheeling life he wanted, but at the expense of those around him. The film uses footage, both new and old, including material from home movies shot over decades in formats including 8mm, 16mm, VHS and digital - the bulk of the footage shot by Ira Sr, Lynne Sachs and her brother Ira Sachs Jr, the director whose own films include Little Men and Love Is Strange.

Early on, Lynne’s mother Diane talks about her marriage to and divorce from Ira, seen in early footage as a clean-cut middle-class suburbanite. The picture gets more dense as we learn more about Ira’s enthusiastic womanising and tendency to surround himself with much younger partners. A second wife, Diana, is seen in tears, uncertain as to how her marriage went wrong, while another girlfriend, Mallory Chaffin, offers her own frank testimony. A picture builds up of a sprawling extended family– with another sister, Beth Evans, turning up towards the end, having been the secret relative that, for 20 years, the ‘official’ Sachs siblings didn’t even know about.

One can’t help suspecting that at the root of the story - and perhaps of Ira Sr’s problematic personality and emotional opacity - is his mother Rose, a.k.a. ‘Maw-maw’, a formidable, forbidding woman who clearly loves her son, yet thoroughly disapproves of his lifestyle to the extent of regarding him as “a cripple… as if he was born an idiot.”

Through its depiction of Ira, the film indirectly sketches a picture of a generation of American males whose lives were changed by the radical ideals of the 60s but who remained no less patriarchal for all that - although the resounding conclusion here is that this oddly detached, possibly damaged man remains unknowable, inaccessible even to those closest to him. As Lynne Sachs herself says at the end, the film is neither a portrait nor a self-portrait, but “my reckoning with the conundrum of our asymmetry” as a family.

Fragmentary construction, and the refusal of a too clearly defined narrative framework – despite occasional voice-over by Sachs – can make the film feel somewhat self-enclosed. Viewers may well feel like outsiders at a family council, having to puzzle over connections for ourselves, despite captions identifying participants. Nevertheless, it is perhaps in the nature of such a ‘reckoning’ that it may make few concessions to the outside observer; and as the completion of what Sachs sees as a trilogy, following States of UnBelonging (2005) and The Last Happy Day (2009), the film might indeed be best understood as one chapter in a continuing stream of work by an experimental, highly personal film-maker.