In Mauritania, northwest Africa, a woman is forced to gain weight for her future husband 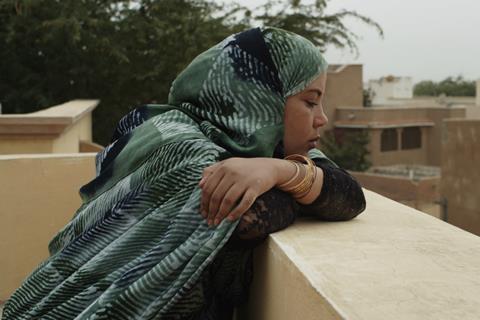 Fat is a feminist issue in Flesh Out. The assured, sensitively handled second feature from Michela Occhipinti offers a fresh perspective on body image and self-worth that will strike a timely chord. Festival interest should be ample for this modest but deeply engrossing tale of female empowerment.

Occhipinti brings a documentarist’s instincts to her first drama

Based on true events, the film paints a society in which the way to a man’s heart is through a woman’s stomach. In Mauritania, in northwest Africa, a fuller figure is considered the true mark of beauty.  Verida (Verida Beitta Ahmed Deiche) is about to enter into an arranged marriage. Her desirability will be measured in curves and calories. Encouraged by her family, she has embarked on gavage; a process of forced feeding similar to the way a goose liver is fattened up to become foie gras. Verida is expected to eat 10 meals a day, and Occhipinti pictures the constant assembly line of milk and couscous that she must consume if she is to gain 20 kilos before the wedding. It is a sight designed to still the appetite of the hungriest viewer.

Verida has never given her family cause for trouble. Throughout the film, she seems to be an observer of her life rather than someone who exerts any control over it. Stark interiors create the sense of a princess trapped within a tower. She is seen peeping through curtains to catch a glimpse of her fiancee at a family meeting from which she is excluded. We witness her regular visits to a rooftop sanctuary where she can look down on the world.

Occhipinti and co-writer Simona Coppini provide Verida with several challenges to her view of the world. Her closest friends, including Amal (Amal Saad Bouh Oumar), encourage her to see beyond gavage. A girl reiterates the old adage that you can never be too thin, replacing one tyranny for another. Her mother and grandmother have a whole life set out for her in which she will marry, honour her family and inherit a beauty parlour. A very different possibility emerges from her encounters with Sidi (Sidi Mohamed Chinghaly), the handsome young man who provides the scales required for her regular weigh ins. The looks and smiles they exchange hint at the possibility of a genuine romance.

Occhipinti previously directed the documentary Letters From The Desert (2010) and she brings a documentarist’s instincts to her first drama. The use of non-professional actors and the unobtrusive camerawork is part of a quietly observant style that draws the viewer into these lives. Intimate close-ups on Verida make her flashes of indignation and glazed looks of defeat the key to understanding her emotional turmoil.

Newcomer Verida Beitta Ahmed Deiche readily handles the demands of being the centre of each scene, making us care for a character we long to see break free from the shackles of so many oppressive expectations. She captures the conflicting pressures that are brought to bear from all sides on Verida but also conveys the quiet revolution that is building within her. Little acts of disobedience create the sense that she is beginning to think and act for herself.