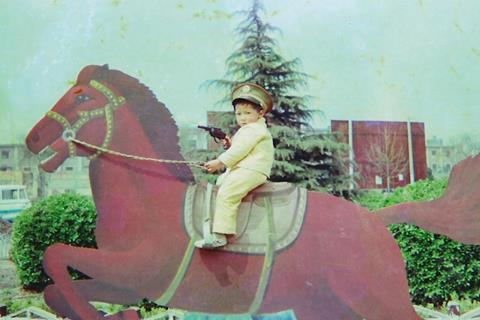 A Chinese family has their private laundry aired to ultimately therapeutic effect in Four Journeys, an uneven feature-length debut by the Amsterdam-based multidisciplinary practitioner who goes by the artist name of Louis Hothothot. A high-profile slot as the opener for the first physical IDFA since 2019 should spark further festival play at non-fiction-oriented events, prior to small-screen exposure for a work which handles thorny, often painful material in an accessible, audience-friendly manner.

Frequently sugaring his pill with Harry de Wit’s conventional score — which emphasises the whimsical and quirky aspects of the material — Hothothot breaks no new formal ground. The structure of his screenplay is somewhat fussy: the title’s quartet of travels — back and forth between Europe and China, and within China itself — unfold alongside four chapters during which Hothothot comes to terms with his status as an illegal baby (colloquially termed a ‘black kid’) born in the 1980s in contravention of China’s tough One Child Policy.

His arrival yielded serious consequences for his Beijing-based parents; especially his father, whose political ambitions were effectively obliterated by the punishments he received as a result. Returning to his homeland after a five-year absence and with his camera seemingly permanently in tow, Hothothot pressurises his mother and father into discussing matters they would clearly prefer to avoid. Even more sensitive than his own illicit birth are revelations which gradually emerge concerning his older brother Zhigou, who died in a drowning accident at 18 months old.

Wisely working with two more seasoned editors, Hothothot stitches together a multiplicity of story-strands across the film’s nearly two-hour running-time, including the emotional and romantic travails of his sister  — a sparky presence who oddly remains nameless until being identified as Jingjing in the end credits — and the director’s relationship with his French girlfriend Artemise.

The turbulent political backdrop of the family’s travails is frequently touched upon, including the enduring cult and influence of Chairman Mao, without yielding any particularly incisive insights. Much is made, for example, of a photo taken in Beijing’s Tiananmen Square in the mid-80s in which Hothothot’s mother is shown in an advanced state of his pregnancy — but the tragic events of global import which took place in that specific locale just a couple of years later are left unmentioned.

Hothothot is primarily concerned with himself here, his self-fixation and evident determination to use filmmaking as a tool of self-help psychoanalysis occasionally yielding uncomfortable results for his kin and the viewer alike. But it is Zhigou — his sad fate, its distressing aftermath (in Chinese tradition, no funeral rites are performed for children who die very young) and its impact on his parents — who emerges as the real emotional focus here.

The finale, in which several family members tearfully gather at the place of the baby’s disposal — it was certainly no funeral — and plant a memorial bougainvillea bush, is a movingly low-key, reflective sequence of mourning and reconciliation.